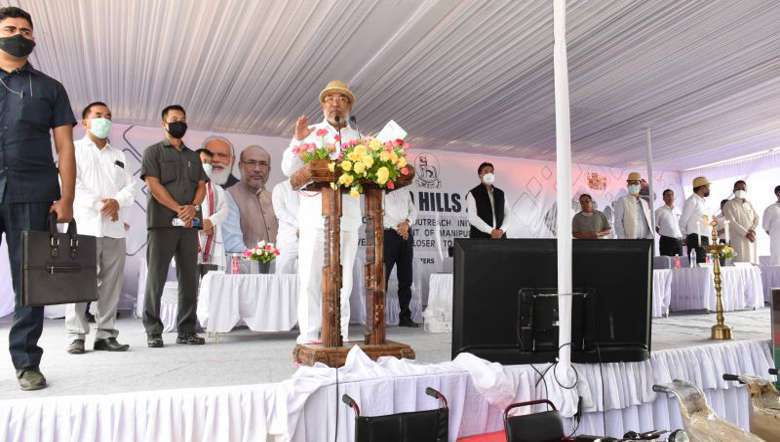 Chief Minister N Biren Singh on Monday emphasised that the Article 371 C is a constitutional parliamentary matter and assured the people that the state government led by the BJP is here to protect and preserve the constitutional provisions under the Article.

“We, the government, are here to protect the parliamentary procedures and the Constitution of India. Not a single point, whatever provided in the Constitution under the Article 371 C will be affected," Biren said while launching 'Go to Hills 2.0' held at Peace Ground, Tuibong, Churachandpur on Monday.

Reiterating that the government fully supports Article 371 C in hill areas, the chief minister said, "Once again, I appeal to the people of Churachandpur and the people of the state, mainly the tribal brothers and sisters, that the state government led by BJP is here to protect and preserve the constitutional provisions under the Article 371C”.

Saying thatattempts are being made to make an issue of Article 371 C, Biren urged the people not to play politics and appealed to stand united.

During his visit to Churachandpur on Monday, Biren inaugurated 32 development projects which are under various departments and schemes.

At the occasion, Biren said the process has been ongoing to make Singhat CHC a sub district hospital where he and Biswajit inaugurated the special ward, a power generator and new ambulance.

After arriving in Churachandpur, the chief ministerial team and district in-charge and Minister of Transport, TA and Hills and GAD Vungzagin Valte inaugurated a Trauma care centre at district hospital and launched an advanced life support ambulance.

He also inaugurated PSA oxygen plant inside the district hospital which will generate 1,000 units of oxygen per minute and have a refilling capacity of 200 D type cylinders per hour.

His team then headed to the main programme of the day at peace ground Tuibong where the ‘Go to village 2.0' was launched by the CM. The 32 projects under various departments and different schemes were also launched during the occasion.

The projects which were inaugurated by the chief minister during his visit were Tuikham to Daizang road and Hengkot to T Boljang road under RD and PR department, augmentation of water supply schemes at P.Sejol, Koihen, M. Shimuol, Ningthiching, Songdo, Matijang, Dumlien, B Salvaphai and Khajang, Rovakot villages taken up PHED, DIO Pherzawl District, Trauma Care Centre at District Hospital Churachandpur and 30-bedded ward at CHC, Singhat under State Health Department, PSA Oxygen Plant at Churachandpur and a Plastic Recycling Plant at Sehken Dumping Site taken up by TA & Hills.

At the gathering, he said that the primary objective of the Go to Hills 2.0 is to deliver the welfare schemes under different departments such as PMAY, CMHT, PMJAY, livelihood support scheme affected by COVID-19 etc. to the beneficiaries. He said that the government would identify the eligible and deserving beneficiaries of various schemes and all the government services will be delivered at their doorsteps.

He mentioned that under the Go to Hills mission, the government has taken up various infrastructural projects for inclusive development. Hundreds of projects have been inaugurated and many are ongoing for the welfare of the people, he added. He expressed his hopefulness that these projects would bring positive change and benefit the people living in hill districts of the state.

He stressed that altogether 32 projects worth Rs 37.34 crore are being inaugurated and laid one foundation stone of one project estimated Rs 4.51 crore for Churachandpur district today. Items worth Rs 51.52 crore were distributed to 59,837 beneficiaries, he added. He further mentioned that there are 342 ongoing projects for Churachandpur and Pherzawl with a total cost of Rs 1,100 crore.

Stating that the BJP-led government does not give false promises to the people, he opined that 88 projects worth Rs 381.3 crore have been completed and dedicated to the people in the last four and half years. The government is investing huge sums of money for infrastructural development in the hill districts of the State, he added.

It may be mentioned that the former minister and MLA of 58 Churachandpur assembly constituency V Hangkhanlian whose name was inscribed on all the plaques inaugurated today was conspicuously absent.

As decided by the joint student body of Churachandpur, black flags were raised at Tuibong where the roadside protesters sporting banners and placards carried out a demonstration against the CM’s visit.