Civil bodies alleged that DC Kangpokpi Somorjit Salam manhandled one of the Kuki Inpi leaders while his security guards were also alleged to have manhandled the spokesperson of Kangpokpi civil bodies. 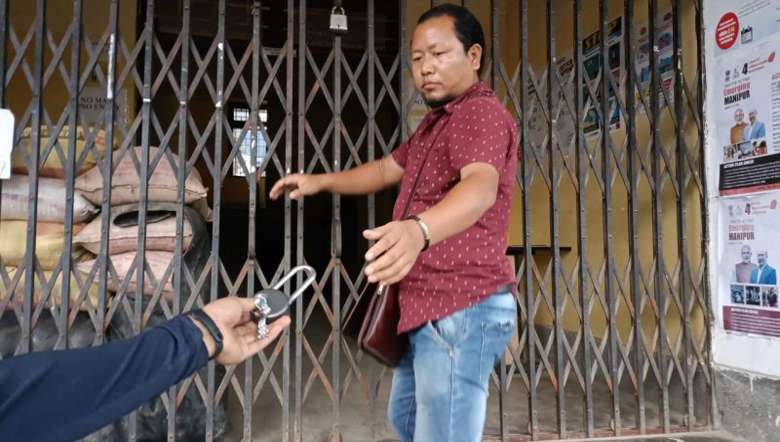 An enraged mob locked the office of the deputy commissioner Kangpokpi and demanded immediate transfer of DC Somorjit Salam, following a scuffle on Monday at Charhajare over conducting a survey in connection with the National Highway expansion issue in Kangpokpi district.

During the meeting, the representatives expressed their anger against the alleged subjugation of the people's rights by the district administrator who even allegedly manhandled one of the Kuki Inpi leaders while his security guards were also alleged to have manhandled the spokesperson of Kangpokpi civil bodies.

They also alleged during the meeting that DC Kangpokpi personally led the survey and bulldozed the public sentiment despite being fully aware of the situation and issue.

They alleged that DC Kangpokpi Somorjit Salam raised his hands and almost slapped one of the Kuki Inpi leaders while his security guards caught the spokesperson by his collar.

The meeting decided to picket the office of DC Kangpokpi and lock the premises until he is transferred from the district.

When they reached the office, the DC Kangpokpi was about to leave. The angry mob was seen attempting to stop him but he went ahead while they shouted to him not to come back.

“We cannot accept his attitude and act upon the people of Kangpokpi and demand his immediate transfer from the district. We will continue with more intense protest in case he is not transferred at the earliest,” he added.

Mawinu, president Kuki Women Union Sadar Hills said that they will not let him come back. It will be wise on the part of the government to transfer Somorjit Salam from Kangpokpi sooner than later to avoid further unwanted incidents, she said.