PHED minister Losii Dikho directed the CMO of Ukhrul to make necessary intimations to the State Health department and start functioning at the earliest. 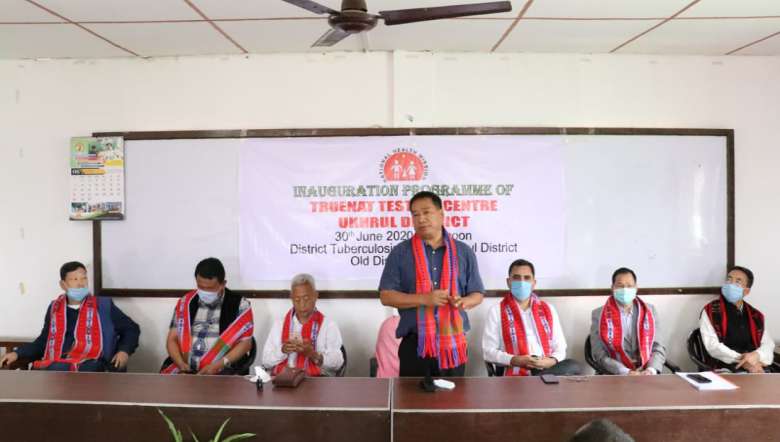 Losii Dikho stated that Molbio Diagnostics manufactures TrueNat machines is a small machine that is battery operated and requires minimal training. He added that the machine can easily give the result between 30-60 minutes and is capable of running up to 16‐24 samples of multiple diseases such as COVID-19, HIV, and TB in a two‐way.

The cost of a test on TrueNat machines will be of Rs 1,000 – Rs 1,500 per test kit. He stated that minimum charges for testing are necessary in order to sustain and keep going. He directed the CMO of Ukhrul to make necessary intimations to the State Health department and start functioning at the earliest.

MLA of Chingai assembly constituency, Khashim Vashum appealed to the people to be grateful to the government and authority for their service. He stated that "the government is very keen to contain the spread of COVID-19. The government has been very active in evacuating our people from various places of India and has successfully brought them home.”

“Any decision taken by the Tangkhul civil bodies should not contradict with the guidelines of the government of Manipur. Instead, Tangkhul civil bodies should extend every possible help to contain the spread of COVID-19.”  Khashim Vashum also gave Rs 50,000 to the district health authority, Ukhrul as an immediate means for managing the test machine.

Chairman of ADC, Ukhrul, Yaronsho Ngalung while expressing gratitude to the state government, appealed for better coordination in the future to fight the COVID-19 pandemic.

Additional chief secretary, MH Khan who is also the nodal officer of Ukhrul and Kamjong district stated that the peak season is yet to come. “We have to be very careful and hill districts need to be equipped with necessary equipment. He informed that the government of Manipur is committed to the people and expects maximum cooperation from various sections of the society. With your help and cooperation, the government is eager to solve this pandemic,” added MH Khan.

CMO of Ukhrul, Dr Kapangring Shimray stated that Ukhrul urgently needed a Microbiologist to actually and run the TrueNat machine. He stated that there are no microbiologists being posted at Ukhrul at present.

President of TNL, Hopingson A Shimray stated that quick testing of returnees and quick segregation of negative cases is one of the best measures to contain the spread of the COVID-19 pandemic at community level.

“We are glad to have one TrueNat machine installed today in Ukhrul but we also like to appeal to the state government to install the same testing machine in Kamjong district,” he added. Shortage of doctors, nurses and other medical officers in Ukhrul and Kamjong districts have hampered the effective fighting of pandemic, stated Hopingson A Shimray.

A memorandum was submitted to the PHED minister by the Tangkhul Coordination Forum on COVID-19 (TCFC). The memorandum called for the upgradation of health facilities of Ukhrul and Kamjong as per the guidelines/yardsticks of Indian Public Health Standard (IPHS), 2012, so that the COVID-19 can be effectively tackled.

The memorandum also called for implementing the provision of hiring human resources and incentives for human resources and community volunteers. Clubbing the valley and hills district under one health director has increased the workload and failed to deliver their services timely, it said. There is an urgent need to have a separate additional health director for the Hill Districts for effective management and smooth functioning, it added.