Manipur: One woman among three drug peddlers arrested in Lilong

The drug peddlers were arrested along with 22 numbers of soap cases suspected to be heroin powder. 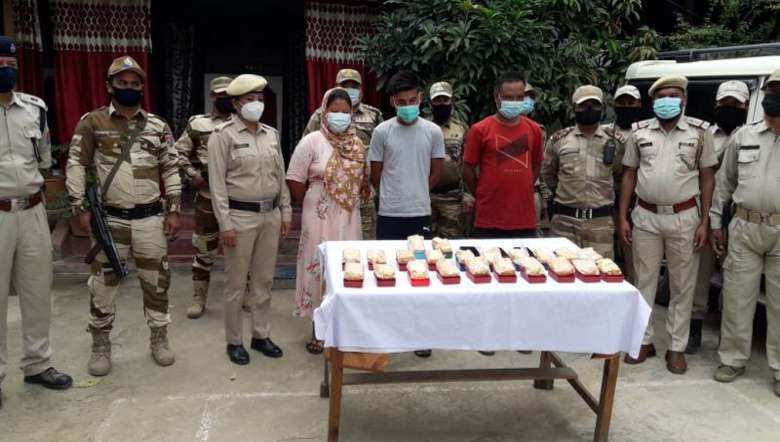 Thoubal District police on Saturday arrested three drug peddlers, including a woman, along with a huge amount of drugs at around 4 pm from Lilong area, Superintendent of Police Thoubal Jogeshchandra Haobijam said.

The SP disclosed this at a press briefing held at his office on Sunday where the three accused along with the seized drugs were produced before the media persons.

Acting on the information, a special commando team along with women police personnel of Lilong PS under the supervision of Additional SP (OPs) Thoubal Sachidananda Soibam(MPS ) and Inspector N Tiken OC, CDO Thoubal under the overall supervision of SP himself conducted intensive frisking and checking at Lilong Idigah Road, SP Jogeshchandra said

During the operation, around 4 pm one unknown person was seen coming by foot at the roadside towards Lilong dam in a very suspicious manner, the SP stated, adding that the police teams detained the person for verification as his behaviour was suspicious.

On verification, the arrested person identified himself as Md Mujibur,43, a resident of Lilong Atoukhong Maning Leikai, the SP said.

On proper search of the person, one black colour polythene containing 22 soap cases suspected to be heroin powder was found from his possession. Thereafter, he disclosed that the suspected heroin powder was given by two persons who came with one white bolero vehicle 10 minutes earlier, SP Jogeshchandra added.

Then, the police teams started chasing the vehicle immediately by contacting them through Md Mujibur's phone. They were found at Lilong Bazaar near an oil pump. The police  team rushed to the spot immediately and detained the suspected persons by observing formalities, the SP added.

The accused identified themselves as Deineihoi Haokip, 25, wife of Hemminson Haokip of Moreh Ward No.2 and  Minlan Tuboi, 37, son of Jangpou Tuboi of Ward No.9.

They were arrested from the spot along with 22 numbers of soap cases suspected to be heroin powder, three mobile handsets along with sim cards and one white Bolero vehicle bearing registration number NL 03 2267 by observing formalities.

The arrested persons and the seized items were being handed over to Lilong Police Station for further necessary legal action and a case under FIR number 88( 9) 2021 Lilong PS under section 21( C)/ 29/60(3) ND & PS Act has been registered at Lilong PS, SP Jogeshchandra added.