Manipur Human Rights Commission has directed the respondents of the case to submit their counter affidavits before the commission by September 15 which is fixed as the next date of hearing. 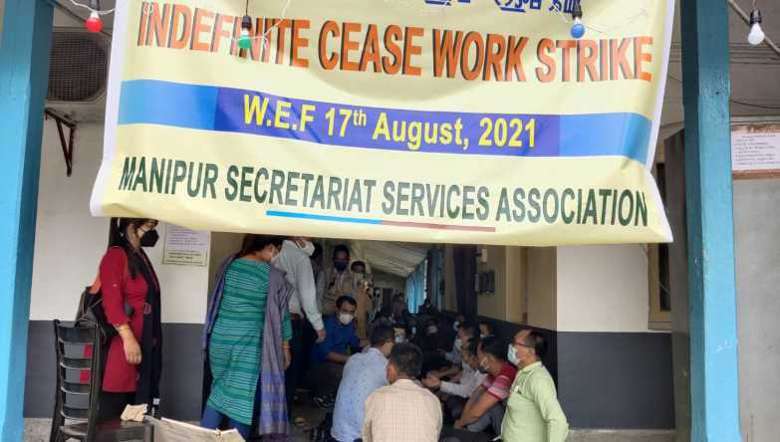 The Manipur Human Rights Commission (MHRC) on Wednesday registered a case against the inconveniences caused by the ongoing cease-work strike launched by the members of the different employee associations of the Manipur Secretariat, after receiving a complaint.

A complaint lodged by one Kangjam Maharabi Singh to the MHRC stated that the visitors were prevented from entering the Manipur Secretariat complex by the striking employees, violating fundamental rights enshrined under Article 21 of the Constitution of India, causing a grinding halt to the functioning of the Secretariat which is the administrative back bone of the state government.

The petition mentioned that a friend of the petitioner was prevented from entering the premises of the Manipur Secretariat and that too in presence of the security personnel, who were deployed for providing security to the Secretariat complex on August 21.

It also ascertained that the cease-work strike was started from August 17 and there are several other Manipur Secretariat employees, who did not take part in the said cease-work strike. However, visitors are not allowed to enter the Manipur secretariat complex by the striking employees and therefore, normal official work came to a grinding halt, and thousands of citizens who are required to access service of the Manipur Secretariat are put to inconvenience, it added.

The petition prayed for directing the state government to ensure that the cease-work strike is called off and to issue an appropriate direction to constitute a Redressal Grievance Committee to address the genuine grievances of the striking employees at the earliest.

It also prayed to issue an appropriate direction to the striking employee associations to restrain from holding cease-work strike and office lockout strike immediately.

The petition further prayed to issue any other appropriate order or direction which the commission deemed fit and proper in the facts and circumstances of the case.

In this regard, the commission has directed the respondents of the case to submit their counter affidavits before the commission by September 15 which is fixed as the next date of hearing.

During the hearing on Wednesday, the commission examined the complaint petition and also heard from the counsel of the complainant.

“Upon such examination and hearing, complaint petition makes out a prima facie case for investigation under Section 12 of the Protection of Human Rights Act 1993,” the commission's order mentioned.