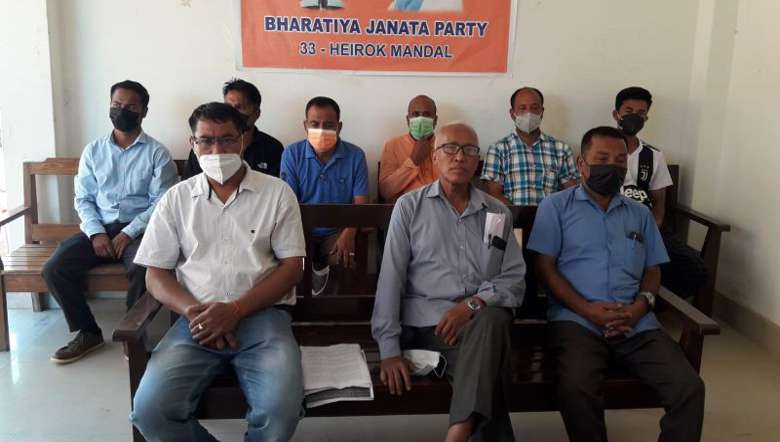 The Congress party is misguiding the people of Manipur with lies in an attempt to get into power, BJP Heirok Mandal alleged on Tuesday.

In a press meet held at the office of BJP Heirok Mandal, president of the Mandal Thokchom Chourjit said that the recent claims made by Manipur state election observer Jairam Ramesh and AICC Manipur in charge Bhakta Charan Das etc., that Manipur is falling backwards in terms of progress show that the Congress party is trying to deceive the public.

Since CM N Biren-led BJP government came to power in Manipur, the state has made progress in leaps and bounds, he said. “BJP Heirok mandal condemns the deceitful claims and statements made by Jairam Ramesh,” he added. Being a state election observer, he must refrain from making such baseless statements, seemingly at the behest of others, again in the future, he added.

Strongly reacting against the statements of CLP leader O Ibobi regarding the Heirok assembly constituency, Chourjit further questioned on what grounds the allegations were made against Heirok MLA Thokchom Radheshyam by the former CM.

Providing monetary aid of Rs 50,000 to each family which has suffered from Covid fatality, is a clear example of what MLA Radheshyam has done for the people of Heirok, he added.

Regarding the Engineering college of Heirok, CM N Biren and Thokchom Radheshyam as the Education minister of that time laid the foundation, he further said. The Dhanamanjuri University Act, 2017 was proposed on the floor of Manipur Legislative assembly by Thokchom Radheshyam on August 3, 2017, and the bill was passed and became an Act, he added. He also refuted the claims that 1,250 persons from BJP Heirok Mandal had joined INC as baseless.

The press meet was attended by workers of BJP Heirok Mandal.