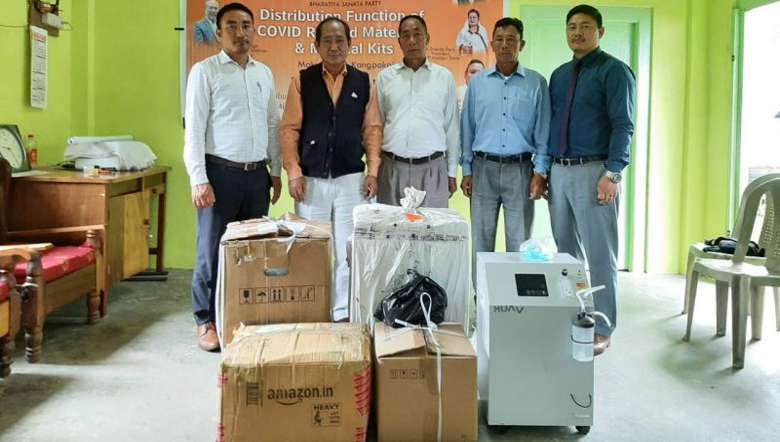 Medicines and medical kits to help fight the Covid-19 pandemic were provided to the Makui Primary Health Sub Centre by former minister and current executive member of Manipur BJP Thangminlien Kipgen on Saturday.

A release issued by Thangminlien Kipgen on Monday stated that Makui villagers had been living with poor medical facilities coupled with lack of proper transportation, and they have been been living in a destitute state for quite some time.

It stated that Makui village has no internet facilities, and it is one of the biggest challenges faced by the student’s community during this time of the pandemic.

Thangminlien in his speech during the distribution programme said that though there is not a single case of COVID-19 in the village, it is necessary that villagers follow Covid related protocols set by the state government so as to avoid all unwanted things from happening in the village, the release stated.

Thangminlen also appealed to all the villagers who are 18 years and obove to get vaccinated, it added.

The former minister informed that though the issue of a proper building of Makui PHSC has been lingering on for quite some time, he has talked with the chief minister of Manipur and the later has already sanctioned funds for constructing the PHSC, and the construction works will begin at the earliest, stated the release.

The release further stated that chairman of Makui village N Silakbou, while expressing his gratitude to Thangminlien Kipgen, mentioned that the village during the last 10 years has seen no development programmes being taken up.

Thangminlien Kipgen also visited nearby villages namely Chaljang and Wakotphai and looked into the needs and problems of the villagers, the release added.