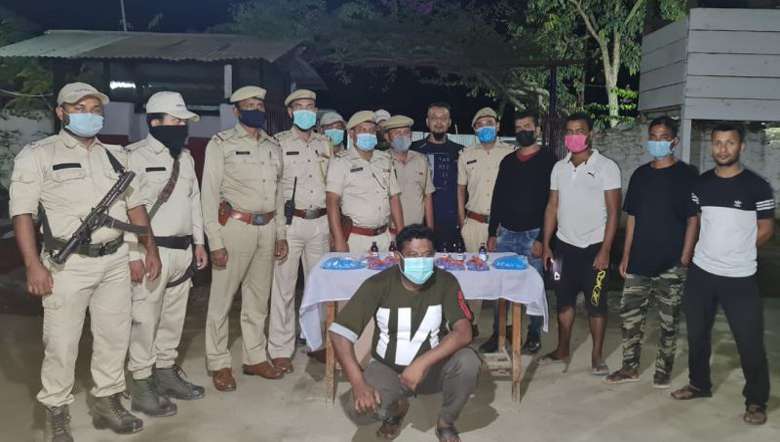 A team of Lilong police station arrested one drug peddler with 2,854 SP capsules from Lilong PS gate along NH-102 at 7:00 pm on Saturday.

As per police source, the peddler has been identified as Md Sahabuddin alias Abo, 50, son of Late Md Samsurjaman of Kwakta Bazar Pangal Lamkhai at present Lilong Bazar, Thoubal district.

The source further disclosed that on Saturday at around 5:45 pm, police received reliable information about the transportation of illegal drugs by unknown persons from Thoubal side towards Lilong bazar on a BALENO car.

Acting on the information, a team of Lilong PS led by Inspector Md Riyaj Khan, OC Lilong PS and some members of ALADA LIlong under the Supervision of Jogeschandra Haobijam (IPS), SP, Thoubal had conducted frisking and checking of suspected vehicles in two strategic points - one team at Lilong PS gate and another team at Lilong Aliya Lamkhai.

During frisking and checking, Md Sahabuddin @ Abo was arrested at 7:00 pm from Lilong PS gate along NH-102.

A regular case under FIR No. 84(08)2021 LIL- PS U/S 21(b) ND&PS Act has been registered against the accused person for further investigation, the source added.