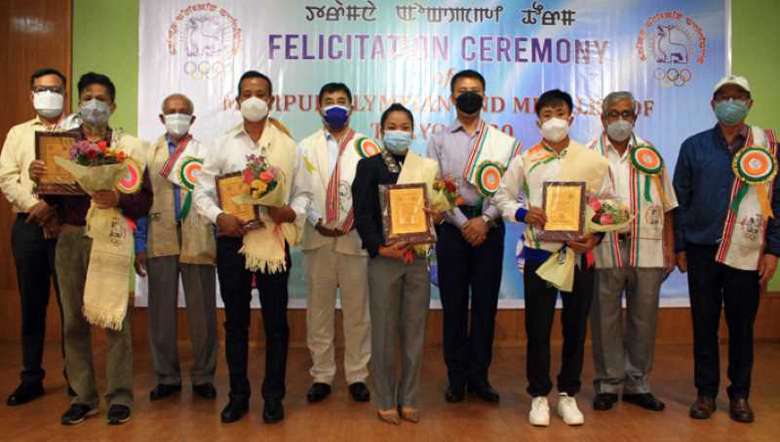 Manipur Olympic Association (MOA) president Th Radheshyam Singh has stressed on channelizing the sporting talents in view of the Paris Olympic 2024, so that more medals may be garnered by state sportspersons.

The Heirok assembly constituency legislator as well as MOA president made the statement while felicitating the five Olympians at Classic Grande on Sunday. The Manipur Olympic Association also honoured former Olympians, state associations officials and media persons with traditional scarfs to mark the National Sports Day as well.

Th Radheshyam Singh said, “We do not lack the spirit or the grit to pursue the gold quest and keep the essence of the ‘Powerhouse of Sports’ tag in high esteem.”

Calling for nurturing more talents, he said that the country as a whole had a dearth of Olympic medals, particularly gold medals, and it is high time the players infused a new zeal to breathe fire for more podium finishes.  “So, we must set our goals, aim high, and focus for a more fruitful performance in the Paris Olympic, 2024,” he added.

Silver medalist weightlifter Saikhom Mirabai Chanu said, a sports person's dream is always to focus on medals but a berth at the Olympic Games itself is a very big thing.

“A little bit of luck is also necessary as we are competing against the best of the best in the world. But at the same time, there is no substitute for hard work, dedication and commitment to reach our desired goals,” she said.

She also encouraged compatriot judoka Sushila Likmabam not to lose heart from a defeat but take a harder stance for the next event.

Judoka Sushila Likmabam also narrated the Tokyo Olympic experience, stating how happy she was when her roommate Mirabai Chanu clinched a silver medal. Although saddened by the fact that she could not deliver the people's expectations, she will continue to refine her skill and train harder for the next Olympic Games, she said.

Hockey stalwarts Sh Nilakanta Sharma, Sushila Chanu Pukhrambam and boxer MC Mary Kom were out of station, and they were represented by family members during the felicitation programme.