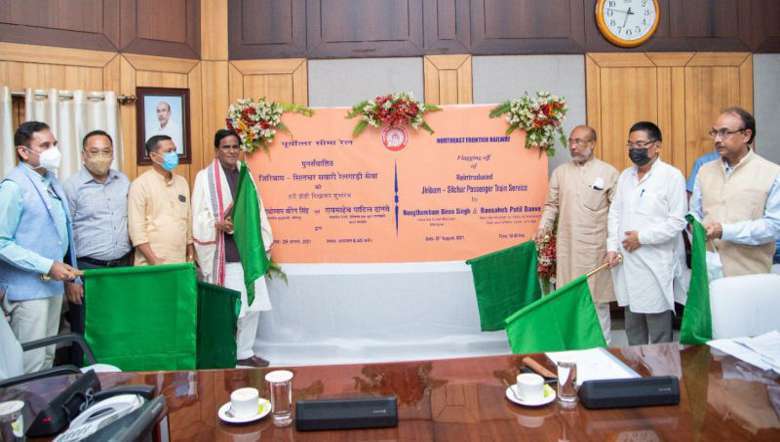 This was stated by him during the flagging off function of reintroduction of Jiribam-Silchar passenger train service via videoconference at the Chief Minister’s Secretariat on Sunday.

Delivering his speech, the chief minister expressed his happiness that the Central government is giving special focus on improving connectivity in the Northeast and to link all the state capitals by rail. He stated the state government is looking forward to completing the Jiribam-Khongsang railway line by December, 2021.

N Biren Singh congratulated the officials and staff of Railways for their sincere and hard work towards the completion of the Jiribam-Imphal Railway Project. He also assured that all the disputes related to land compensation etc., would be resolved soon as he had convened a review meeting with Administrative Secretaries, concerned DC’s and officials.

Union Minister Raosaheb Patil Danve said that it is a proud moment for all of us in reintroducing Jiribam-Silchar passenger train service at this juncture. He maintained that the main purpose of his visit to the state is to inspect the current status of the ongoing Jiribam-Imphal Railway project.

He assured that the railway project would be completed soon. He instructed the officials of Railways to expedite the work and complete the work before the deadline. Raosaheb Patil recalled that it was the aspiration of Prime Minister Narendra Modi to connect all the State capitals of Northeast India by rail.  He praised chief minister N Biren Singh for his commitment to extend all possible support and cooperation to the Railways for early completion of the project.

After the flagging off function, the officials of Railways made a detailed powerpoint presentation about the current situation and progress of the rail work in the state.