Cop among three arrested with brown sugar in Moreh

A team of Tengnoupal district police commando arrested the three men with brown sugar worth Rs 2.5 crore in the international market 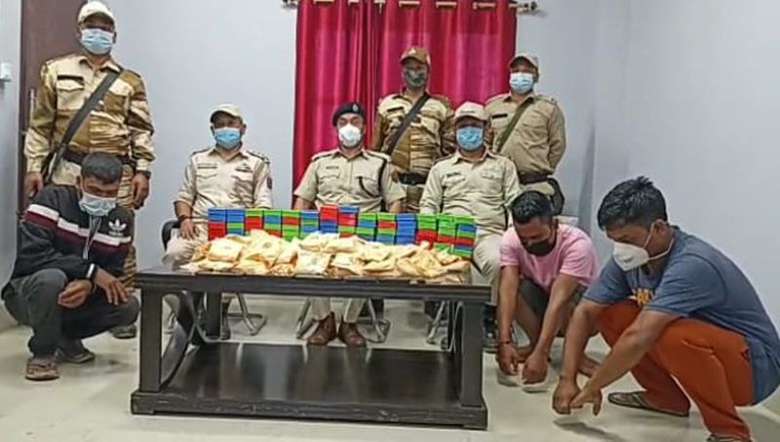 Three men, including one personnel of Kakching police commando, were arrested with brown sugar worth Rs 2.5 crore in the international market by a team of Tengnoupal district police commando on August 27.

According to police, specific information was received on August 27 around 11 am about the transportation of drugs items from Moreh towards Thoubal. Based on the information, two teams of Tengnoupal police commando comprising inspector M Robindro and SI M Uttam of CDO, Tengnoupal, under the supervision of Tengnoupal SP Th Vikramjit, were stationed near AC Hotel, Moreh Bazaar for intercepting the illegal transportation of drugs.

At around 2 pm the commando teams came across a black colour Kenbo bike (Myanmar motorcycle) without registration number. The bike was coming from Moreh Gate No.2 (Namphalong gate) towards Moreh Bazaar carrying one carton box driven by an unknown person with one pillion rider. Being suspicious, the commando teams stopped the said vehicle for checking. While checking the box, the men managed to escape from the spot.

However the Commando teams could identify one of the two persons who escaped as Moirangthem Sushil Singh of Khangbok Makha. All the security check posts were alerted. On examining the carton box, 100 numbers of soap cases containing 100 packets of suspected brown sugar were found. The contraband drugs weighing 1.254 kg including the weight of the plastics were seized in presence of witnesses from the spot.

Later, the commando teams identified the other two persons who escaped as M Sushil Singh and Y Warish Khan. In the follow up action the police arrested Sushil from Wangjing Bazaar at 6:30 pm on the same day. On the revelation of Sushil, the CDO team arrested Warish Khan from the same market area around 7pm. On the further revelation of the arrested two, the owner of the seized brown sugar and kingpin of the group, Md Hafijuddin was also arrested at 7:20 pm from Wangjing Bazaar.

The arrested persons and the seized drugs have been handed over to officer-in-charge of Moreh Police Station and a case has been taken up at the police station for investigation.