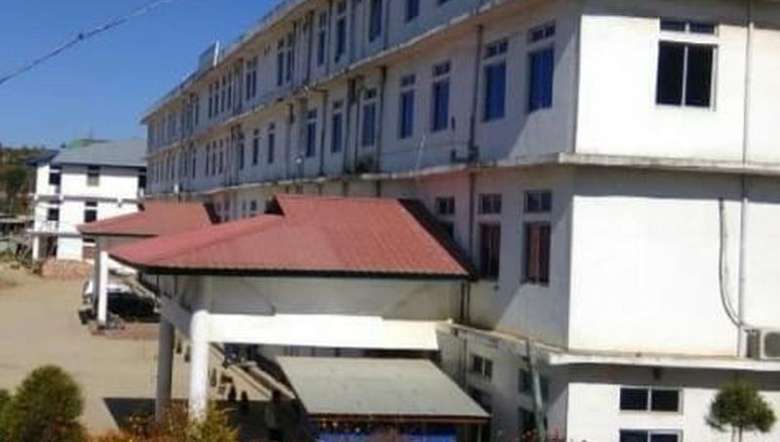 Concerning the death of a Covid patient in the hospital isolation ward of district hospital Ukhrul on Wednesday, the Hospital Management Society (HMS), District Hospital, Ukhrul clarified that the patient died after failing to respond to treatments after suffering from shortness of breath.

Amid allegations of negligence, the HMS, District Hospital, Ukhrul issued a release on Saturday late night with the intent to put the matter at rest, detailing the background that led to the patient’s demise.

It stated that the management was compelled to give out the press release in view of the “allegations and disinformation going on in the social media against the Hospital and the staff” for the death of one 53-year-old COVID-19 patient, Angel Wungkhai, wife of James Wungkhai of Khamasom Walely village at the Covid-19 Isolation Ward of District Hospital on August 25.

The release stated that the patient was tested positive for Covid-19 on RAT at CHSRC, Ukhrul on August 18.

Informing that the patient was not vaccinated, the release mentioned that she was referred to district hospital, Covid Isolation Ward for further management.

She was admitted at District Hospital, Covid Isolation Ward on August 18 and at the time of her admission in the Hospital, her oxygen saturation was found to be 80 per cent and she had complaints of upset stomach for one week and history of fever and headache, it stated.

According to the statement, the treatment was initiated immediately in the line of Severe Covid Illness and as per the treatment protocols of COVID-19 issued by the government. Oxygen supportive therapy was also started at the rate of 10 litres per minute. However, her clinical condition and oxygen saturation level failed to show satisfactory response, it stated.

It further stated that investigations done in the Hospital also suggested the presence of infection.

“Therefore, a broad spectrum antibiotic was added to cover the infections. She was also put on NIV (non invasive ventilation) with BAIN Circuit for better oxygenation and favourable saturation. But despite her low oxygen saturation level, she was apparently not much in distress, a clinical condition known as ‘happy hypoxia’. Her oxygen saturation fluctuated between 67 - 74 per cent while on oxygen support with the aid of NIV,” it maintained.

On August 25, her oxygen saturation level started fluctuating between 65-80 per cent and became non-recordable, it stated.

“At 3:15 PM, the patient complained of shortness of breath followed by gasping. Resuscitative measures were initiated immediately on receiving the complaints by the doctors and nurses on duty at that time but she failed to respond to it and she was declared dead at 4:14 PM on August 25,” it stated.

The release is being issued so that the disinformation circulating in various social media causing confusions and apprehensions among the public could be cleared and put to rest through this official information, it stated. “This is not directed against any individuals, families or groups,” it mentioned.

“We share the grief and sorrows of the family for the loss and we are deeply saddened by her death. We did our best to save her life using every means available to us and by following the standard treatment protocols laid down by the government which we have been following in our Hospital for every COVID-19 patient," it added.

According to sources, the patient started frothing from her mouth within minutes of a drug administered to her and died at around 4 pm on August 25. Nurses at the hospital had given her a dose of ‘Meropenem,’ as per sources.

The fuming public who rushed to the district hospital demanded a prompt explanation from the hospital authorities concerning the death.

Prior to handing over the matter to the civil bodies, family members of the deceased patient had alleged negligence on the part of the doctors and nurses. They suspected that the injection was administered to the patient without proper diagnosis.

Following the intervention from the police and the civil bodies, an agreement was reached between the hospital authorities and the victim’s family.

The two parties agreed to hand over the case to the civil bodies to investigate and find out the truth behind the tragic incident. An independent committee was formed following the agreement.