AMSU president Haobijam Chalamba recalled the protest of students on August 27, 1965 against the artificial scarcity of food caused by the businessmen and the politicians in the state. 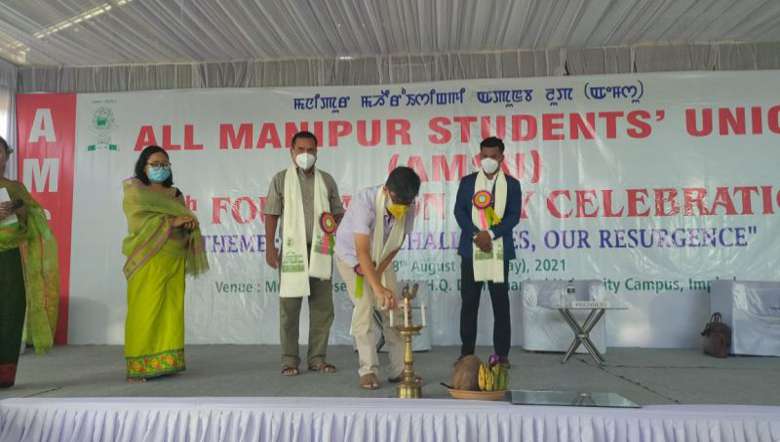 All Manipur Students’ Union (AMSU) on Saturday celebrated its 56th foundation day at its headquarters in Dhanamanjuri University campus.

Speaking on the sidelines of the function, AMSU president Haobijam Chalamba recalled the protest of students on August 27, 1965 against the artificial scarcity of food caused by the businessmen and the politicians in the state.

Chalamba said some students lost their lives during the protest and that particular movement paved the way for the formation of All Manipur Students Union (AMSU) in the state. The union was formed a day after that incident in which the students lost their lives, he said.  Since its formation, AMSU had been taking active roles in raising student related issues, he added.

Besides, AMSU also raised its voice and joined the people's movement in issues such as demand for implementation of Inner Line Permit System in the state, issues of territorial integrity, demand for inclusion of Manipuri language in Sixth schedule, June uprising and many other state issues, said Chalambam.

Acknowledging the people’s support in different movements and protests launched by AMSU, its president also appealed to the people to continue extending support even in the initiatives of the union in the future.

Speaking as the guest of honour of the foundation day celebration, executive director Human Rights Alert (HRA) Babloo Loitongbam said the opinion of AMSU in any issues in the state is considered important and taken seriously.

Babloo raised questions whether the present members of AMSU still possess the qualities and spirit of their former leaders and whether they are prepared to face the changing socio, economical and political scenario of the state.

Giving his opinions on the prevailing issues concerning shortage of fertilisers in the state, the executive director of HRA claimed that around 2.3 lakh bags of fertiliser are required to supply all the paddy fields in the state.

It is learnt that the state government demanded around 5.8 lakh bags of fertilisers from the Centre in which the Centre provided around 4.4 lakhs bags which is double the requirement of the state, he added.

However, it is unfortunate to learn that there are reports of fertilisers shortages, said Babloo while questioning the whereabouts of the surplus fertilisers.

Babloo also expressed his desire to see AMSU organising seminars and discussions on issues beyond the state. During the function, prizes were distributed to the winners of different competitions organised by the union as a part of Hunger Marchers' day.