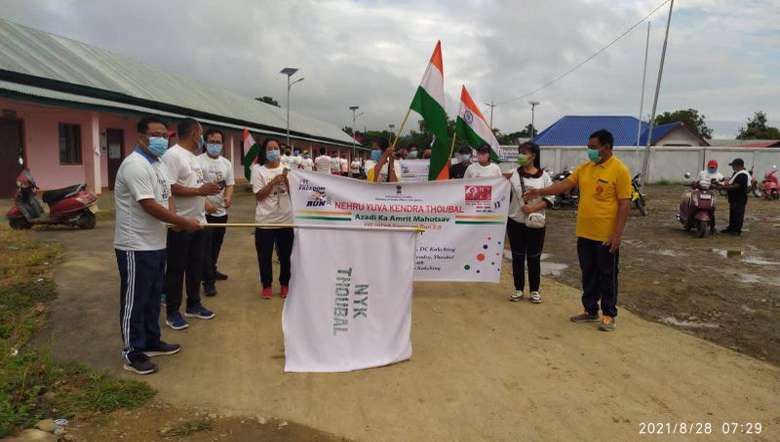 Nehru Yuva Kendra Thoubal in collaboration with district administration Kakching on Saturday carried out a ‘Fit India Freedom Run’ as part of celebration of Azadi ka Amrit Mahotsav in which over 75 youths took part.

Youths of Kakching Runners, Keirak, Youth Volunteers Association (YVA) Pallel and NYK volunteers of Kakching district were flagged off from DC Office Complex at 7:30 am by SDO Waikhong Abujam Romen Singh on behalf of the district administration, stated a release.

It stated that the aims and objectives of the ‘Fit India Freedom Run’ was explained by district youth officer, NYK Thoubal Michael T Mate. He said that the event was organised to simultaneously spread the message of keeping the people and society fit by starting a Fit India Movement and highlighting the stories and heroes of the Freedom Struggle for India’s Independence.

The release stated that SDPO Kakching K Gitchandra Singh also attended the programme on behalf of SP Kakching and oversaw the modalities of the Freedom Run.

The ‘Fit India Freedom Run’ started from DC Office Complex Kakching, continued on Highway-137 A, went through Kakching Bazaar, touching a few localities and culminated back at Irabot Park, Kakching Bazaar, it stated.

All participants were presented a T-shirt each before the run from the NYK Thoubal side and given refreshments after the run, it mentioned. The celebration of Azadi Ka Amrit Mahotsav was conceptualized on March 12, 2021, by the Ministry of Youth Affairs and Sports under the ‘pillar of Action and Resolve @75’, it mentioned.