According to Kangpokpi police, information was received at around 8 pm on August 25 that three persons from Assam who came to Kangpokpi were kidnapped around 1:30 pm on the same day. 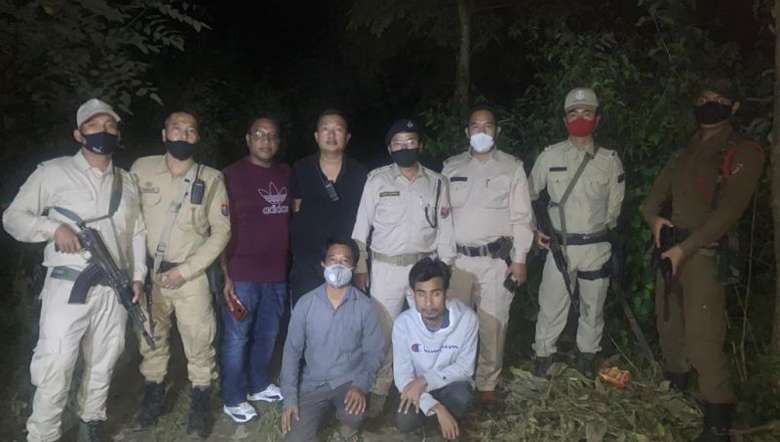 Two persons from Assam, who were abducted by unknown miscreants in Kangpokpi, were successfully rescued by Kangpokpi police under the supervision of SP Kangpokpi Karthik Malladi along with a team of Assam police on Saturday evening in Kangpokpi district.

It may be recalled that Mandip Basumatary, a resident of Madhabpur, Ward No 1 in Bokahan Town of Karbi Anglong district, Assam along with two of his friends identified as Kamal Hazowari and Anup Mech came to Kangpokpi district for some reason in a Bolero vehicle bearing registration number AS 03 AB 5177 on August 24. The next day, Mandip reportedly informed his wife that they would start their return journey to Bokajan at 10 am. However, their mobile phones have been found switched off and since then no communication could be done with them.

Mandip’s wife Pramita Basumatari reportedly lodged an FIR in Bokajan Police Station the next day. She had stated in the FIR that an unknown person called her demanding an amount of Rs 50 lakh for releasing the three persons. She also requested Assam Police to rescue the three persons.

According to Kangpokpi police, information was received at around 8 pm on August 25 that three persons from Assam who came to Kangpokpi were kidnapped around 1:30 pm on the same day. The police also learned that one of the kidnapped persons was released on August 26 evening to go and bring Rs 50 lakh as ransom money. However, his release came to the knowledge of the district police only after he reached Bokajan, Assam on August 27 morning.

After coordinating with Karbi Anglong SP, Pushparaj Singh, Assam police along with the released victim reached Kangpokpi district headquarter in the intervening night of August 27 and 28 while Kangpokpi district police assured for safe rescue of the two persons who are still under detention of the kidnappers.

According to the police source, the released victim was asked by the kidnaper to come to a location with the ransom money and after a discrete operation of more than 6 hours, one person was arrested.

It continued that upon interrogation of the arrested person and use of technological means, the suspected location of the kidnappers was identified and a rescue operation was launched after sunset and probably, seeing the police parties approaching from multiple sides, the kidnappers escaped from the spot into jungles and the abducted persons were rescued safely.

Police teams are searching for the kidnappers in the suspected locations while the rescued persons were handed over to Assam police with due formalities.