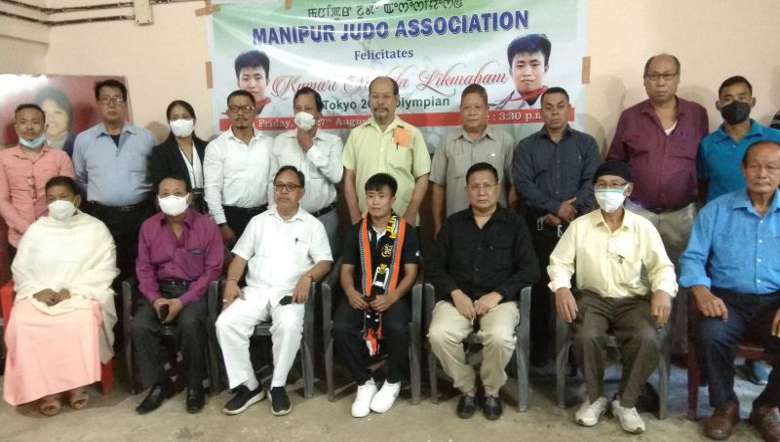 Today is an important day of my life as I was able to meet my coaches and MJA officials as these are the people who have provided me a platform that put me to various National and International arenas, said judoka Sushila Likmabam during her felicitation by Manipur Judo Association (MJA) at Khuman Lampak on Friday.

Sushila further said, “I would love to guide the youngsters and do not want them to face the difficulties and hurdles as I have faced in my life, particularly in reaching the Olympic Games platform.”

“Though I may not be able to interact freely with my coaches during my training session outside and during the Olympic Games, I have never forgotten anyone or anybody. I wanted to do much more for Judo and Judokas as well as for the coaches, but I could not fulfil it at the moment. I know my coaches and people of the country might have expected a medal from me but that I could not fulfil this time,” she added and winded off saying that she is determined to continue to work hard and give her best for the upcoming meets including the Paris Olympic Games 2024.

Former minister Kh Ratankumar, who is the president of MJA, while lauding the effort of Sushila Likmabam said that life is full of challenges, how they are faced is to be counted. Winning is important but the sole intention is to participate in the Olympic Games.

“We as people of the tiny state of Manipur had the zeal to fight, dedication and Sushila Likmabam made a beginning for the Manipur Judo Association’s fondest hope. She will continue to inspire many upcoming judokas,” said Ratankumar.

He also appealed to the state government to chart out a sports policy where it caters to development in emerging stronger athletes and more participation to Olympic Games.