Manipur Agriculture department director Kh Lalmani said if the trial is successful it will bring a great benefit to the farmers. 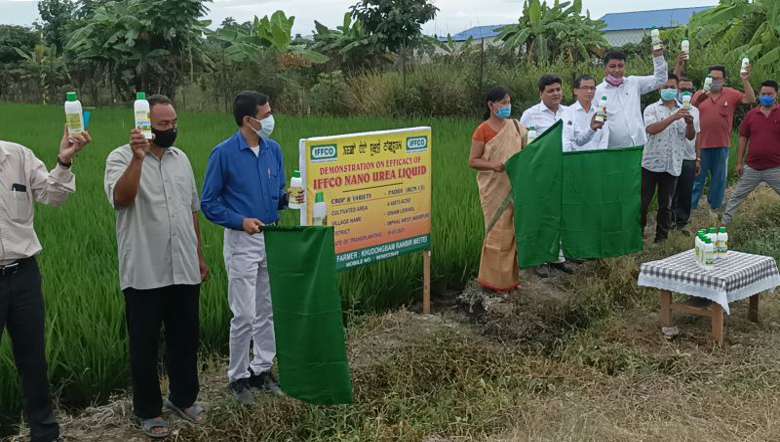 During the launching programme, Lalmani said that nano urea liquid would bring a great benefit to the farmers in various ways if the trial is successful.

Due to excess urea, the fertility of soil could be reduced and could even lead to health hazards from the chemicals found in the urea. It is a good step in introducing the Nano urea liquid as it will give less harmful impact with less chemical content. If the trial is successful it will bring a great benefit to the farmers and to the transporters, and eventually, the issue of unavailability of fertilisers could be solved in the near future, he added.

One bottle of nano urea liquid (500 ml) is equivalent to one bag of urea and this would facilitate the transportation of the urea in larger quantities, said Lalmani.

One of the farmers, Khundongbam Ranbir Meitei said that he used the IFFCO Nano urea liquid in his paddy fields instead of using the normal solid urea. He was advised to use the Nano urea liquid by one of the agriculture officers.

He said that the paddy fields, where the liquid urea was used, have produced a proper quantity of yields as compared with other fields.

IFFCO state marketing manager Ajit Bhattacharya told the media persons that the Nano urea liquid is less toxic chemical fertilisers as compared with other chemical fertilisers. The crop yields will be increased and the said Nano urea liquid has been tested at over 11,000 different areas across the country. It will bring more benefit to the farmers in logistics, storage and others.