A total of 22,336 applications for availing the OVID-19 affected livelihood support scheme have been received, the chief minister said. 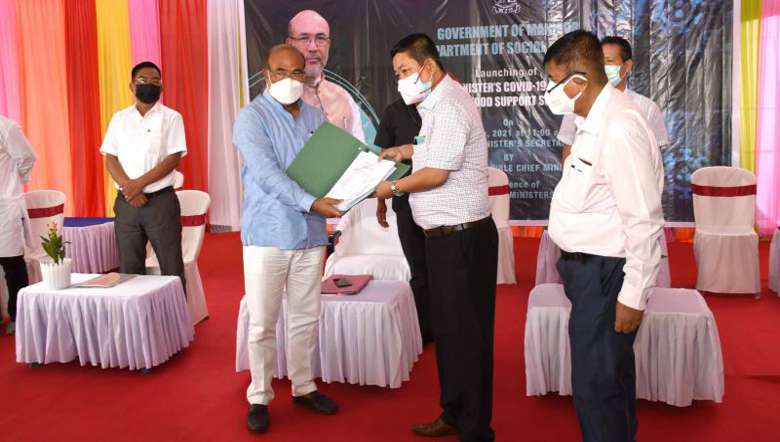 Manipur Chief Minister N Biren Singh on Sunday launched the Chief Minister’s COVID-19 Affected Livelihood Support Scheme and said that the state government had been working to uplift the poor and weaker sections of the state.

The launching programme of the Chief Minister’s COVID-19 Affected Livelihood Support Scheme, organised by the department of Social Welfare, Manipur, was held at the CM Secretariat Sunday.

Speaking at the occasion, the chief minister stated that the government is for the people and is always ready to serve them. Informing that an officer of Social Welfare department would be deputed to Manipur State Cooperative Bank (MSCB) Ltd., located at Old Assembly Road, he said that those who are sincere about starting an activity for earning their livelihood could meet the officer stationed at the bank and avail loan without requiring any guarantor. 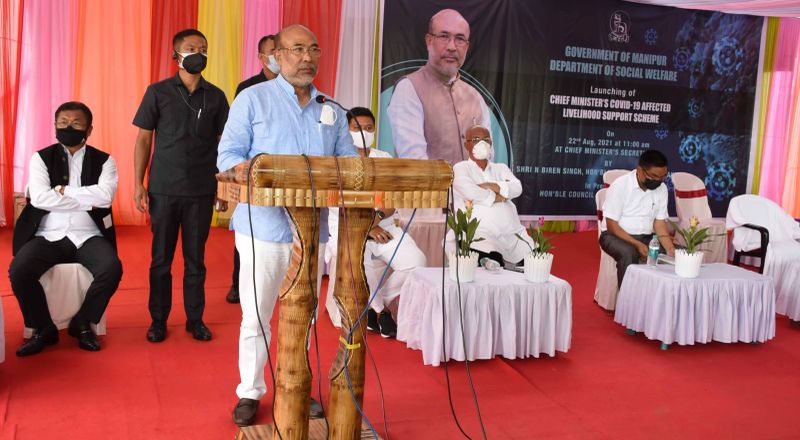 Biren further stated that the chief minister’s COVID-19 Affected Livelihood Support Scheme was introduced considering economic dislocations, which had severely affected the livelihood of a large percentage of the population leading to an inability to maintain a basic minimum standard of living.

He mentioned that applications were invited for the scheme through proper survey at the district levels and added that a total of 22,336 applications have been received so far including 13,651 from street vendors, 4,890 from transport drivers, 3,680 from van drivers and 145 artists.

Out of the applications received, 7,943 had been verified and of this first instalment of Rs 2,500 would be distributed to 6,276 applicants today bearing a total amount of around Rs 1.56 crore.  The second instalment for the same would be disbursed within September this year, he added.

Asking to avail the scheme, he appealed to the public to be sincere and to abstain from making any false document to get the benefit, while applying for any schemes or scholarships so that the benefit could reach the targeted and eligible beneficiaries. He informed that with sincere functioning of the government authorities more than Rs 2,000 crore had been invested in hill areas so far under Minorities and Other Backward Classes (MOBC) department for welfare and development of the Hill Districts.

Mentioning that the role of sincere and dedicated leaders is very necessary in taking the state towards progress, he appealed to the public to elect leaders who aimed to work for their welfare, as their representatives.

Regarding the COVID-19 pandemic, the chief minister expressed his belief that the pandemic must be one of the consequences of human activities that had destroyed the balance of nature for the last many years. He appealed to the people to know the importance of nature and contribute to preserving it by planting trees so that we could minimise occurrence of certain disasters in future.

Biren also appreciated Prime Minister Narendra Modi for his dynamic leadership quality, the timely initiatives taken up to contain the spread of COVID-19 pandemic and easing the hardship faced by the people by supplying free rations. He also appreciated the deputy commissioners, superintendent of Police, officials of different districts, Medical staff, civil voluntary organisations and others for their tireless efforts in controlling the spread of the virus.

He informed that around 6,000 applicants had been identified for Start Up Scheme, which was put on hold for some period due to the pandemic, for which interviews were going on. He added that the loan amount under the scheme would also be disbursed very soon. He further informed that Meeyamgi Numit and Hill Leaders' Day would be revived soon considering the situation of the COVID-19 pandemic.

Education Minister Sorokhaibam Rajen, while delivering his speech, maintained that the state had shown much improvement in many sectors, whether law and order, education, health infrastructure, water supply and others, under the leadership of N Biren Singh. 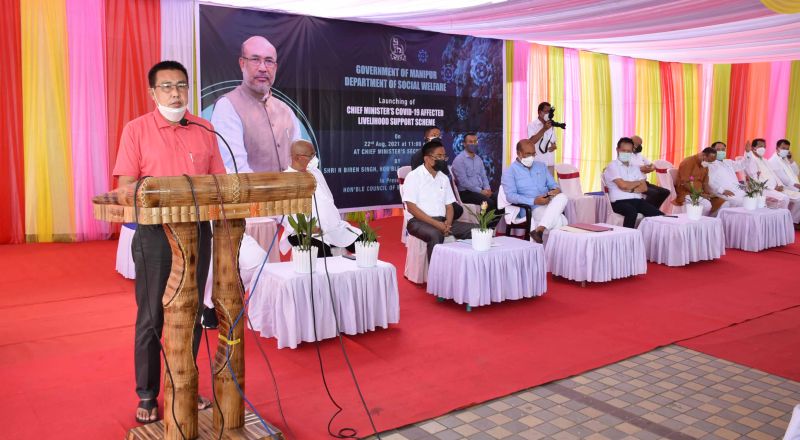 Delivering his welcome speech, secretary to chief minister Ningthoujam Geoffrey stated that the scheme was introduced under the supervision of the chief minister considering the effect of COVID-19 pandemic to the livelihood of a large percentage of population, especially vulnerable groups who did not have a regular source of income.

He added that the mode of application for the scheme had been made simple so that applicants did not face any problem while applying. He appealed to the public to be sincere and apply for the scheme only when one is eligible to avail it so that the benefit could reach the targeted groups.

During the function, financial assistance under chief minister’s COVID-19 Affected Livelihood Support Scheme was distributed to some selected beneficiaries consisting of street vendors, van drivers, public transport drivers and artists among others from different districts.