Owing to the rise of positive cases in the state and the prevailing scenario of the COVID-19 pandemic in Ukhrul district, tourists have been prohibited from visiting Mount Wuya Kachui at Sincha village in Ukhrul, Manipur, this year. 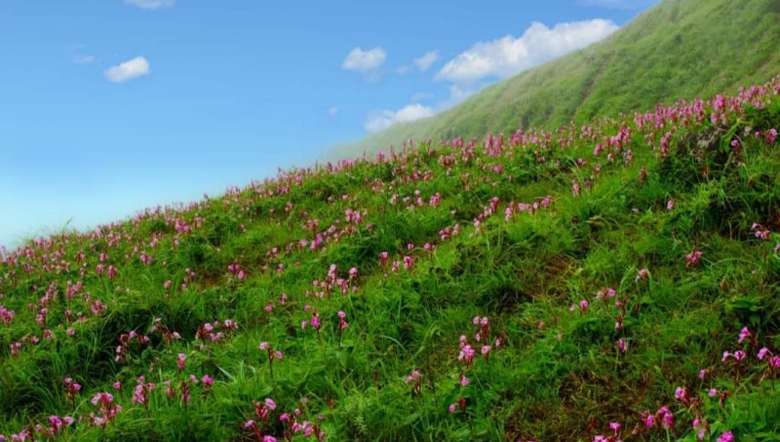 Owing to the rise of positive cases in the state and the prevailing scenario of the COVID-19 pandemic in Ukhrul district, tourists have been prohibited from visiting Mount Wuya Kachui at Sincha village in Ukhrul, Manipur, this year.

Shingcha Katamnao Long (SKL) president Thotmung Zimik informed this correspondent that no tourists would be allowed to visit Mount Wuya Kachui where the beautiful Wuyawon blooms in abundance in the month of July in view of the pandemic in the state.

SKL hopes everyone will co-operate for the safety of the public. In case anyone breaks the rules and comes, they will be penalized with a fine of Rs 5,000 per head by SKL and they will be handed over to the police, he said. This decision has been taken by the SKL, he added.

The Wuyawon flowers bloom at Mount Wuya Kachui, Shingcha. A flower commonly known as ‘Pink Orchid Ginger’ blooms in abundance during the month of July and lasts till the first week of August. The flower belongs to the Zingiberaceae family with a botanical name ‘Caulokaempferia Secunda.’

The fog enveloping the expansive peak gives one a feeling of mystery. Shingcha village is located 91 km away from Imphal and 55 km from Ukhrul towards Kamjong.

In Shingcha village, legend has it that Maphat was a brave headhunting warrior who beheaded many people during wars. The warrior is believed to have lived in the early 19th century, in the days where heads were taken as war trophies. He preferred to venture alone in his mission.

In one such mission, he had to halt for a night on his way home at the peak as it was already very late. He was tired after the long journey carrying his war trophies. Though he could not get a wink of sleep, he chose to stay because he was too worn out and from there on the peak came to be known as ‘Wuya’ which means restless due to nightmare and ‘Kachui’ means peak.

According to the legend of Shingcha, Maphat had taken many heads of Sihai Khullen in many of his raids. He was killed in one of his missions at Sihai Khullen. The peak came to be known as Wuya Kachui after the lone warrior spent a restless night.

The pale pink flower turns deep pink when it rains. One of its interesting features is that it always turns towards the east in its bloom. The hill is enveloped by fog most of the time and only the lucky ones get to see the flower blooming under the sun when the clouds open up for a short while.

Wuyawon has been blooming magnificently at Wuya Kachui and has attracted a lot of visitors, including foreign tourists. Wuyawon will bloom beautifully as usual this year sans visitors.