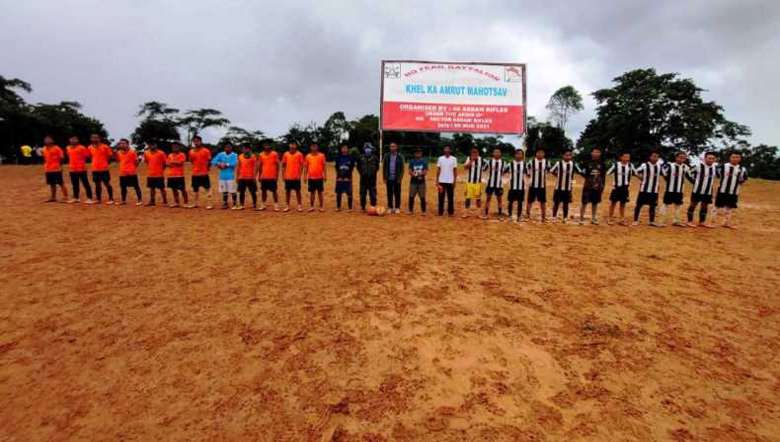 The sport meet was organised by the 44 Assam Rifles under the aegis of 22 Sector, Assam Rifles IGAR (East) in collaboration with the Namtiram Youth Club as part of ongoing weeklong 75 years of Independence celebrations as 'Azadi ka Amrit Mahotsav'.

The 44 Assam Rifles adjutant said that a total of 14 teams including two women teams competed in Football and Volleyball disciplines to prove their talents. The event was organised with an aim of promoting physical, mental and psychological well-being in promotion of Fit India Mission, he added.

On the concluding day, the participants observed World Humanitarian Day on Friday with the National anthem sung by locals and unit jawans in the backdrop of picturesque Liangmai village.

“Sports shape the social and personal character along with moral development of the youth and sportsmanship behaviours. It also offers opportunities for learning and development which can directly translate into other areas of life and work,” he said.

Achunbou expressed his desire to have more cooperation in other social welfare fields to further strengthen the bond of friendship and trust among locals and Assam Rifles.

The company commander Major Malla hailed the participants for exhibiting their sportsmanship during the three-day sports event.

He emphasized that sports should be seen as a tool to increase self-esteem among all and also provide opportunities for the development of the women in the face of gender-related barriers beside the physical, mental and psychological gains.

The battalion felicitated the winners and runners up team in both men's and women's category.

The repair work of the building shall start by the unit along with the villagers as soon as the weather improves in the area, he said.

The unit has decided to dedicate the repaired school building to the school children of the village to commemorate the 75 years of Independence, he announced.

The tournament was conducted keeping all Covid protocols in mind and strict adherence to Covid appropriate behaviours.