The cycle rally team was joined by members of the Manipur Adventure and Mountain Biking Association (MAAMBA) in Imphal for a historical tour of the Kangla Fort. 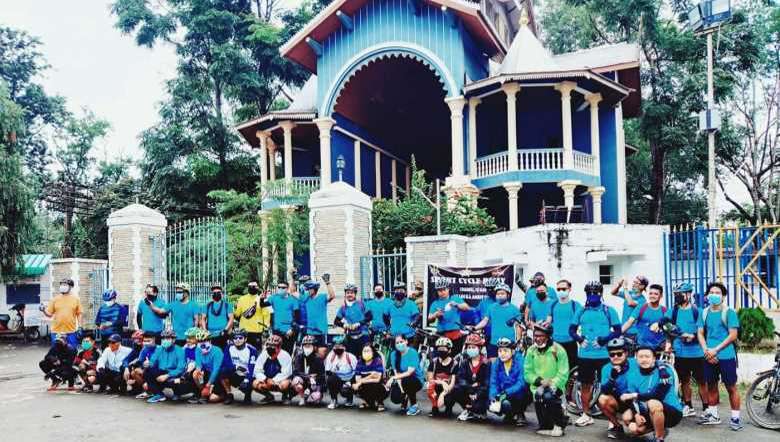 A cycle rally from Chandel via Pallel to Kangla Fort Imphal, covering a distance of over 100 km was organised as a part of Azadi Ka Amrit Mahotsav by the Chandel Battalion Assam Rifles in collaboration with Chandel Cycling Club (C3) on Thursday.

At about 6 am, after a break and distribution of C3 T-shirts, the cycling team headed from Chandel to Pallel where the team was flagged off by Brigadier Ajay Singh Rana, CDR, 26 Sector Assam Rifles. As a mark of appreciation, the Chandel Cycling Club, in commemoration of '75th India Independence Day' honouring the freedom fighters before the flagged off moment, also presented a memento to Brigadier Ajay Rana Singh and Colonel Ajit Khatre of 18AR under whom the rally was organised.

The cycle rally team reached Imphal and was joined by members of the Manipur Adventure and Mountain Biking Association (MAAMBA). The combined team visited Kangla Fort for a historical tour of the site, including a photo session and friendly interaction with refreshments.

The team on their return home was welcomed for lunch at Pallel Assam Rifle Camp. The short cycle rally ended on a positive note as the participating members, particularly the youths of Chandel, enjoyed the rally and took home the significance of good health and the message of eco-friendly coexistence.

He also gave a special thanks to the deputy commissioner, Chandel M Rajkumar and the commandant, 18 AR Chandel colonel Ajit Khatre for organising the rally.

Telein Bingky, the founder of C3 told the Imphal Free Press, “I am delighted that the second official rally of the club was successfully concluded and more of such cycle rallies covering bigger distances within and outside the state are definitely in the itinerary of C3 in the days to come.”