Sushila Devi is the lone women judoka in the Indian squad, who clinched a berth from the continental quota in the Tokyo Olympic Games 2020. 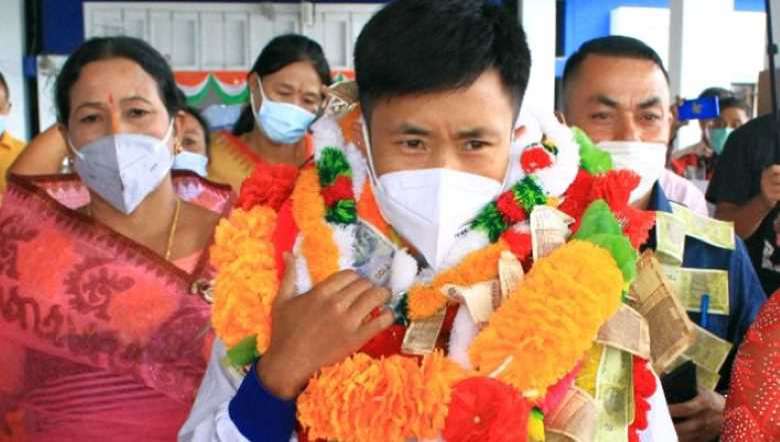 Inspite of bowing out in the first round of wrestling event of Tokyo Olympic Games 2020, judoka Likmabam Sushila Devi was accorded a warm welcome by officials of Youth Affairs and Sports department along with family members while touching down at Imphal BT International Airport on Wednesday.

The 26-year-old L Sushila Devi is the lone women judoka in the Indian squad, who clinched a berth from the continental quota in the Tokyo Olympic Games 2020.

Sushila Devi said, “I am overwhelmed by the love and support of the people. Although I returned empty handed from the Tokyo Olympic Games, I still found exposure to international platforms and am happy to become an Olympian. But I will not rest and try hard for Asian Games as well as the Commonwealth Games and be prepared for the Paris Olympics in 2024.”

Later, she was given a warm reception at her native place Heingang Marjing Lai Haraopham, Imphal East where chief minister N Biren Singh also attended the function. As part of the state government policies, Sushila Devi will be given Rs 25 lakh as participation fees to Olympic Games and a raise to sub inspector rank in Manipur Police department.

Mentioning  that societies with people of good character, manners and mutual respect are a must for taking the state to its path of progress, he said that it is through the youth’s participation in games and sports that they can be imbibed with such characteristics. Expressing his hope that more athletes from the state would be qualified for Paris Olympics 2024, he also encouraged Sushila to continue putting more efforts in her training so that the latter could bag a gold medal in the next Olympic Games.