The major achievements of Churachandpur administration was highlighted during the Independence Day 2021 celebration in the district HQ. 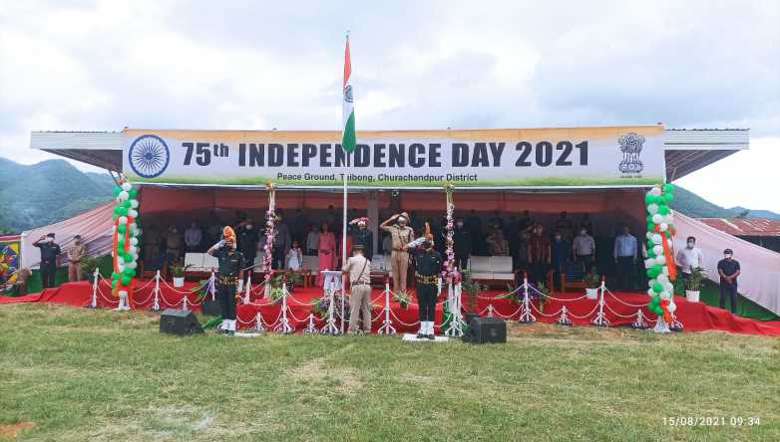 The 75th Independence Day was celebrated at Peace Ground, Tuibong, Churachandpur, organised by the district administration led by deputy commissioner Pawan Yadav and attended by SP, CO of 1st IRB, CEO of ADCC and other DLOs of the district.

The tri-colour flag was hoisted by the DC in front of four contingents with no participation from the school students due to COVID-19.

During the programme, Pawan Yadav reminded the people that the celebration was the result of struggle by the forefathers in the past which led to Indian independence and the national flag was hoisted by the first Prime Minister of India, Pandit Jawaharlal Nehru at Red Fort on August 15, 1947.

He further highlighted the achievements of the district administration making many people get regular tap water, procuring dumping sites at Sehken with the aim of ‘for all free environment', selection of four schools as a model school and construction of five new barrack type quarters and others.

The national flag was unfurled at different places including ADCC complex where caretaker chairman, Khaipao Haokip hoisted the tri-colour flag while the police and Session Judge Complex also celebrated the 75th independent Day in the same manner.

At Pherzawl district, deputy commissioner Mannuamching hoisted the tri-colour in the presence of other officials and the public.

“Even though we all are hit hard by COVID-19, the government has not abandoned its people and is constantly looking for a way to help them,” said the DC during the programme.