Student leader Pebam Chittaranjan Mangang had self-immolated on 58th Independence Day in protest against imposition of AFSPA in the state at Bishnupur Bazaar. 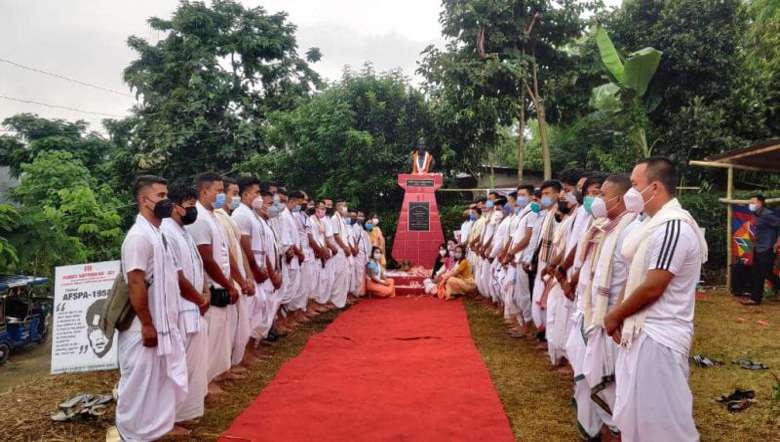 The programme was organised at Pebam Chittaranjan Memorial Complex, Bishnupur Bazaar on Monday in a low key manner due to ongoing pandemic adhering to strict COVID-19 SOPs.

Paying homage to the departed soul of Pebam Chittaranjan, who had self-immolated on 58th Independence Day in protest against imposition of AFSPA in the state at Bishnupur Bazaar, the organiser paid floral tribute and observed a two-minute silence at the complex. Observance ceremonies were also held in other districts such as Imphal East, Kakching, Jiribam, Thoubal and others.

Addressing the function, MSF president, Khangembam Bidyasagar said that even after 70 years of independence, the Central government could not remove the ‘black law’ AFSPA from the state. Though India is considered as one of the largest democratic countries in the world, right to life has been looted under the curtain of this draconian act which was imposed since 1980 to combat insurgency.

The peacefulness of the state was completely gone as the land was filled with grief and pain since the imposition of this act. Under the umbrella of AFSPA, the paramilitary forces and army have been misusing their power which led to loss of lives of many civilians and many women had been molested and raped, he added.

He stated that imposing such an Act in the northeastern states and Jammu and Kashmir is the conspiracy to suppress human rights. People should continue to fight for this cause.

While praising the supreme sacrifice made by Pebam Chittaranjan, he said that with the fear that long imposition of AFSPA would lead to extinction of indigenous people of the state, Chittaranjan, who was the advisor of MSF, had sacrificed his life. His self-immolation on the day of 58th Independence Day has symbolised being a torch bearer of future generations for the said cause.

In connection with the observance ceremony, various competitions such as painting, essay writing, debate and photography were held online and results were declared.