The chief minister mentioned that altogether 1,039 UGs cadres belonging to different outfits had laid down arms till date. 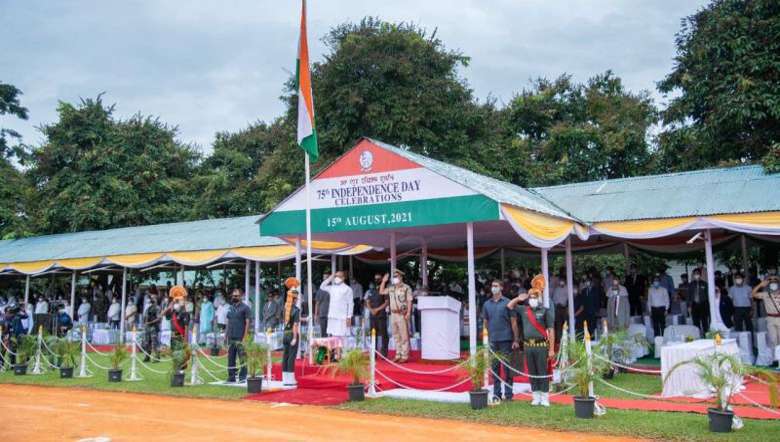 India's 75th Independence Day was celebrated in Manipur on Sunday with the hosting of the tricolour National Flag with Rashtriya salute by Chief Minister N Biren Singh at the 1st Manipur Rifles Parade Ground in Imphal.

Highlighting the various achievements and progress of the present state government, he stated that the law and order of the state has been improved and cited the Most Improved Small State (Overall) and Law and Order Awards recieved at the India Today e-State of the States Conclave and Awards 2020.

Biren also mentioned that a total of 1,039 insurgents belonging to different outfits had laid down arms till date and the state had witnessed decrease in bandhs and blockades in the last few years.

Moreover, the public has started witnessing night life in the state and the truck transporters have even removed the guard to defend the windshield as the highways have become safe, he said.

The gaps and relationship between the public and police have been strengthened by implementing a healthy community policing and there is no communal hatred between different communities, he added.

Regarding the war on drugs, CM Biren said that one should never politicise the issues related to drug menace. He informed that the state law enforcing agency had destroyed 13,660 hectares of poppy plantation, seized 1,000 kilograms of opium, 100 kilograms of heroin and busted many brown sugar manufacturing laboratories.

The poppy farmers were also given an alternative means of farming after destroying the poppy plantation so that the livelihood of the poor farmers are not affected, he further informed.

Biren also informed that in the second edition of the Indian Innovation Index, 2020 prepared by NITI Aayog, the state ranked third position under the North-Eastern and Hill States category and first position in the Northeast states category and the CMHT was recognised and awarded as the best designed health insurance scheme by the Indian Express Group.

In regards to the allegation on unavailability of fertilisers, the chief minister clarified that there is no shortage of fertilisers in the state, the farmers can collect the fertiliser from the concerned MLAs, DCs and officials by producing valid proof.

Moreover, the state government has taken up steps to ensure that all farmers get the fertilisers, he added.

The Centre had rendered invaluable assistance to Manipur during the COVID-19 pandemic, he said, informing that the state government had also strengthened its healthcare staff and infrastructures.

A total of 14.25 lakh persons had received vaccination in the state with 2.6 lakh already receiving the second dose of the vaccine, Biren informed, adding that the government is targeting to vaccinate the remaining seven lakh individuals by September.

"If once all the eligible individuals are vaccinated, the state can easily overcome the pandemic," said Biren.

Stating that the government ensures full functioning of universities, he said that regular vice-chancellors of DM University, Manipur University of Culture and MU have been appointed.

He also informed that 60 schools had been covered under the School Fagathansi Mission and enrolment of students had increased by 25 per cent so far in these 60 schools.

During the celebration, the chief minister reviewed the guard of honour which was coordinated by 12 contingents commanded by SP of CID (Technical) Anupam.

Medals, commendation certificates and trophies were also handed over to different armed personnel and government employees, during the celebration.