A hawk's eye on the McMahon Line

While botanists could breed a new and beautiful variety of a flowering stem, residents feel rivers of joy moving along the boundless beauty of nature. But the land of the teaching of Buddha is unceasingly under threat from its neighbors. 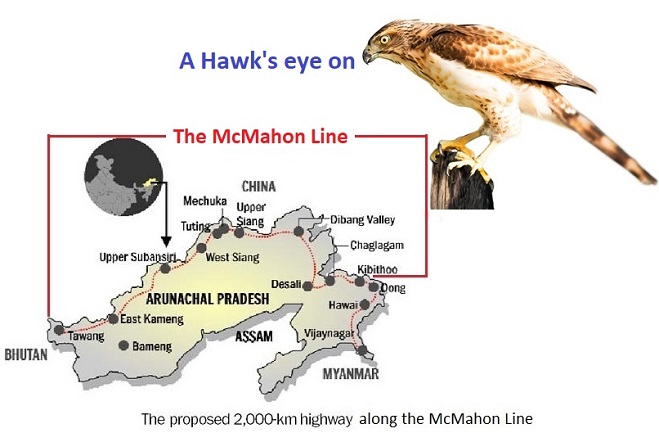 The nursery rhymes “Jack and Jill went up the hill to fetch a pail of water” is actually happening for a living as they struggle under mountainous hardship. There is no transportation to the frontier province after Itanagar as there is no road down the river over the hills. He walked by the side of his father through wet paddy cultivation at subzero temperature while going to Zero but hospitalities from the facial tattoos of Apatanis welcomed them. It’s a land of the Dawn-Lit Mountains, a word Aruna + Chala (Sun rising), a sobriquet for the state in Sanskrit, also known as the Orchid State of India, a paradise on earth.

While botanists could breed a new and beautiful variety of a flowering stem, residents feel rivers of joy moving along the boundless beauty of nature. But the land of the teaching of Buddha is unceasingly under threat from its neighbors. It shares the borders with Bhutan, Myanmar and controversial McMahon line with China. The demarcation line has never been recognized by Chinese stating a treaty signed between Tibet and British Colonial Administrator Sir Henry McMahon in 1914.

History reminded us that Chinese are never to be trusted. They forcefully occupied East Turkestan, Tibet, Yunnan, South Mongolia, Manchuria, Macau, Hong Kong, and Taiwan. After Doklam in 2017 and now Galwan valley, Chinese might eye on Arunachal again. In 50s, they built a military road through Ladakh to connect Tibet with Xinjiang. India objected which led to war in 1962. They left Arunachal but at the end retained control of about 38,000 square km of territory in Aksai Chin. They forcibly annexed Tibet in 1959 when India didn’t raise any voice.

Memories of Chinese aggression still fresh in the minds of people from Assam after PLA reached the outskirts of Tezpur, invading border post at Namka Chu (a mountain stream of India, Bhutan and Tibet near Tawang) and Bomdilla. Infrastructure wasn’t built up then when Indian Army fought war in the Kameng Frontier through mud tracks of Assam and mountainous terrain in Arunachal but Chinese withdraw its original position across the McMahan line when Indian Army begun mobilizing counter offensive.

Connectivity is the bottleneck for Arunachal where people reportedly catching Chinese networks despite having no connectivity on the Indian side. Chinese constructed new expressway and railway network in the border areas of Tibet and Arunachal Pradesh linking Lhasa and Nyingchi in the Tibet Autonomous Region over the Yarlung Tsangpo that flow India as Siang and then Brahmaputra.

Chinese Embassy used to issue staple visa to Arunachal people time to time claiming Arunachal Pradesh as part of South Tibet. India needs to understand Chinese ploy to keep India unhinged to stop raising the voice of freedom of the Republic of Tibet. And they keep India busy with faceoff at LAC at the entire international border and also by sabotaging mutual trust and violating bilateral agreement and disturbing stability at border area.  They asked Tibetan herders to settle down in remote locations close to the Arunachal border to safeguard its interest. India however asserted with firm stand ignoring Chinese claim over Arunachal and has reviewed its policy towards the development at the border by investing huge infrastructure.

When India has successfully landed a Mirage 2000 jet fighter for emergency landings on Yamuna expressway and there are areas where people virtually find no roads to move inside Arunachal. This writer being a former air warrior has seen vales and hills from hovering helicopters. We read stories of thousands of pounds of vegetables rained from the sky over New South Wales of Australia to feed endangered species affected after wildfire but villagers from Arunachal living far away from mainland India are depending on Army supply from air dropping.

They were exciting moments of hard life for survival. Search and Rescue mission for missing fighter jets near Dollongmukh was horrendous hours where fighter aircrafts go for dropping payload. Although Air Force has no base other than Advanced Landing Ground ALG in Tawang, Walong, Vijoynagar, Tuting, Zero and Aalo but landing C-17 Globemaster at Mechuka ALG and Sukhoi-30 MKI at Pasighat ALG gave IAF a quantum leap. All other ALGs are well capable of landing any copters, AN-32 and C-130J aircrafts.

Arunachal has plenty of rivers namely Kameng, Tawang, Subansiri, Siang, Dibang, Lohit, Tirap and Dikrong. Due to non-availability of roads and bridges, localities move on foot across the hills. Now as a banker, he has driven the valley on wheel. Can anyone imagine the time took a week to reach his duty from Guwahati as it is frequently submerged by floods due to landslides hampering all transportation? When bridges wash away by raging floodwater, life is difficult to move on.

An NH from Tawang near Bhutan via Bomdilla, Itanagar, Ziro, Pasighat, Tezu, Namsai and Longding go along the boundary of Assam. But India doesn’t have strategic road near to China border. Now 2000 km highway is proposed to construct along the IB starting Tawang to Vijaynagar touching Myanmar. The Border Roads Organization is doing great job on the Himalayan valley and has recently constructed strategic bridge at Daporijo over the Subansiri River that could provide movement of supplies and mobilization to Army deployed along the LAC. India also gave befitting reply to China by laying railway track to Tawang.

Tezpur is geo-strategically important for India’s defence in the northeast. IAF is equipped with sophisticated MiG, Sukhoi and Rafale supported by IV Corps of Indian Army. For India, McMahan Line is an undisputed boundary with Tibet but China continued to treat the line as illegal because Arunachal is sparsely populated mountainous territory with tremendous scope of hydropower and with almost all the major tributaries of the mighty Brahmaputra originated. Having a hawk’s eye over the McMahon line by the Dragon, India needs to be vigilant under the watchful eye at LAC.