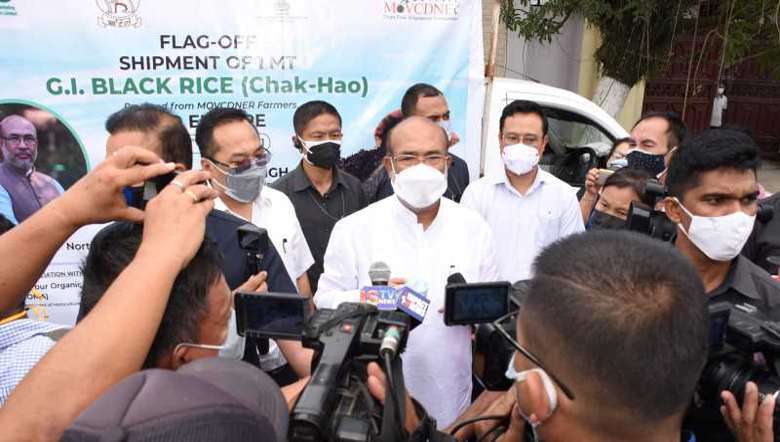 Manipur Chief Minister N Biren Singh on Thursday flagged off a consignment of 1 mt of organic Chak-Hao (black rice) to Europe in a function held at the western gate of Chief Minister’s Secretariat.

On the occasion, he also flagged off vehicles carrying quality seeds for distribution to villagers of different districts affected by destruction of poppy plantations due to the Government's ‘War on Drugs’ campaign. Quality seeds are being provided to villagers under the Alternative Seed Distribution Scheme by the department of Horticulture and Soil Conservation, government of Manipur.

Speaking to the media, N Biren Singh said that Chak-Hao had got the Geographical Indication (GI) tag and it had good demands from different parts of the country as well. He said that for the first time, 1 MT of this highly nutritious rice variety was being exported officially to different European countries.

He further said that export of organic ginger and pineapple are also being done regularly under the aegis of Manipur Organic Mission Agency (MOMA), department of Horticulture and Soil Conservation, Government of Manipur. Mentioning that all necessary support is being extended to farmers in this regard, he said that there is need for quantity and quality increase in production of indigenous varieties.

Regarding distribution of seeds, he said that today’s distribution of seeds was for around 460 hectares for the farmers affected by destruction of poppy plants as a part of the ‘War on Drugs’ campaign. N Biren Singh also appreciated the people's support and positive response to the campaign. Seeds of F1-Cabbage, quinoa and ginger would be provided to the farmers of Kangpokpi, Chandel, Ukhrul, Tengnoupal and Senapati as alternative to poppy, he added.

After the ‘War on Drugs’ campaign which was launched to destroy the illegal poppy plantations, many poppy growers were affected as a result, during 2020-21. To mitigate the adverse and immediate impact of poppy destruction on poor farmers, N Biren Singh instructed the officials concerned to form an inter-departmental committee and chalk out ways to provide quality seeds as an alternative means of livelihood to the farmers.

The committee recommended distribution of quality winter seeds as alternative crops. An amount of Rs 50 lakh was sanctioned during 2020-21 for procurement of the same and distribution to the farmers.