“But if he finds pleasure to handle the Naga issue as a ‘law and order’ problem, he is not the right person to solve the long standing Indo-Naga problem,” the NSCN (I-M) stated. 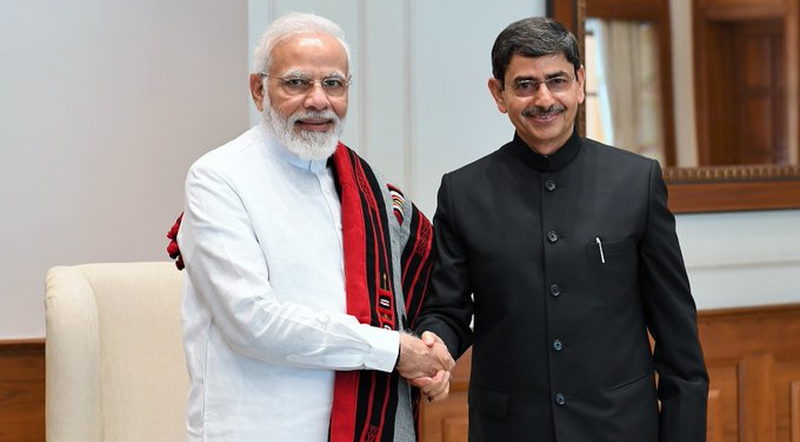 The National Socialist Council of Nagalim or the NSCN (I-M) has given a strident yet polemical response to the governor of Nagaland RN Ravi who had pointed out that there was a deplorable law and order situation in the state. Ravi had said that he had been closely observing the precarious law and order situation in the state with a lot of concern ever since August 2019 when he became governor. “Day to day unrestrained depredations by over half a dozen organised armed gangs, brazenly running their respective so called ‘governments’ challenging the legitimacy of the state government without any resistance from the state law and order machinery has created a crisis of confidence in the system”, he had stated.

In its response, the NSCN (I-M) on Saturday not only reiterated but also emphasized that the Naga political issue is not a “law and order problem” as it is made out to be. The Naga armed group which has been at the negotiating table with the government of India stated that “any Indian Interlocutor” who represents the centre needs to prove himself as a man who stands committed to solve the longest political conflict in Southeast  Asia. “But if he finds pleasure to handle the Naga issue as a ‘law and order’ problem, he is not the right person to solve the long standing Indo-Naga problem,” the NSCN (I-M) stated.

Directly referring to the governor who is also the government interlocutor to the peace talks, the NSCN (I-M) said that “such an Indian Interlocutor will rather complicate and prolong the process which is not the desire of both the Indians and the Nagas”. The statement also reminded that twenty three years of “Indo-Naga political talks” have come down in the history of the world as the longest period of political negotiations.

While directly stating that the Naga issue was much more than mere law and order issue, the NSCN (I-M) also axes to grind with the rest of the Naga political groups when it stated that “taking advantage of peaceful environment created by the Indo-Naga ceasefire there were offshoots of pseudo-nationalists tagged with high sounding names. But in the long run they proved themselves nothing less than commercialized organizations least connected with the Naga political issue”. The NSCN (I-M) said that nobody cried foul against “such mushrooming of mercenary groups which is the root cause of the problem today that smears the ongoing Indo-Naga political process”. While one is not sure how will the rest of the armed Naga groups who are already at the negotiating table react to such an observation, NSCN (I-M) made it a point to remind all that it is the “recognized and legitimate national organization of the Naga people and not a gang”.

The group also invoked the recent history of the Naga political negotiation and pointed out that the first Indo-Naga ceasefire agreement was signed on September 6, 1964 for political dialogue.  After the first attempt at peace talks failed, it too thirty three years for the “Indo-Naga political talks” to resume during the PV Narasimha Rao regime that initiated to establish contact with the NSCN in 1995 resulting in declaration of the second “Indo-Naga ceasefire on August 1, 1997, recalled the NSCN (I-M). Pointing out that the political talks had passed into the hands of six Prime Ministers of India, NSCN (I-M) said the historic framework agreement was signed on August 3, 2015, supervised and guided by Prime Minister Narendra Modi.

The NSCN (I-M) also reiterated that it was the inherent right of any sovereign people and nation to collect taxes from the people and commercial establishments. This was aimed at countering the allegation of extortion as raised by Ravi. Terming the ‘taxes’ collected as the sources of sustenance for the Naga political movement this far, NSCN (I-M) claimed that this was “legitimately acknowledged” by the earlier interlocutors and Indian authorities and it was never an issue. While making an attempt at legitimizing the collection of taxes, the group stated that the situation has been further compounded with “the madness of ‘extortions’ that are being carried out by some groups in the guise of freedom fighters”. This implied that NSCN (I-M) is the only legitimate body that could levy taxes from the people.

The latest exchange of words or rather perceptions between the interlocutor/governor and the NSCN (I-M) may further sharpen the difference of opinions that might have an indelible impact on the actual outcome of the final inking of the framework agreement between all Naga groups and the government of India. When RN Ravi expressed his desire to deal head on with the law and order situation in Nagaland, he had officially taken on the chief minister of the state. However, with NSCN (I-M)’s latest salvo, the volatile nature of the issue may not be pleasant at all.