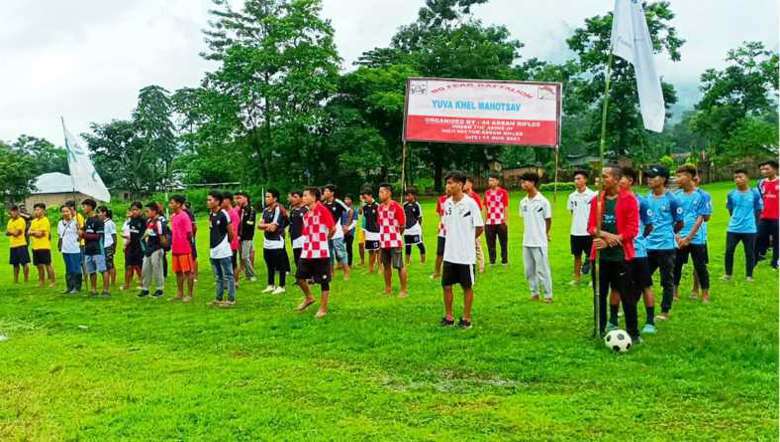 As a part of the ongoing week-long 75 years of Independence Day celebrations as ‘Azadi Ka Amrut Mahotsav’, the 44 Assam Rifles under the aegis of 22 Sector Assam Rifles IGAR (East) on Wednesday kicked off a three-day Yuva Khel Mahotsav in Dikiuram village of Tamei sub-division, Tamenglong district.

The event is organised as Jan Bhagidari celebrations with the aim of promoting physical, mental and psychological well-being as a part of Fit India Mission, informed 44 Assam Rifles adjutant in a statement. He also said that a total of 14 teams, including three women teams, would be competing in football and volleyball matches over the next three days.

The opening event started with the national anthem sung by locals and unit jawans in the backdrop of the flowing Barak river water.

Speaking on the occasion, Colonel Pradeepkumar highlighted the pivotal role that sports plays in shaping the future generation and the society. He said that the Yuva Khel Mahotsav aims at improving sports culture at the grass-root level through organised talent identification, structured sporting competitions and infrastructure development.

“Sports contribute to the social, personal, emotional, character building and moral development of the youth including the expression of values and sportsmanship behaviours. It also offers opportunities for learning and development that can directly translate into other areas of life and work,” he said.

The commandant continued that sports should be seen as a tool to increase self-esteem among all. It also provides opportunities for the development of women in the face of gender-related barriers beside the physical, mental and psychological gains.

The Colonel also said that sports can build a congenial community, aid conflict resolution and foster mutual understanding and peer support among groups in past or present conflict. It will help to promote a safe and protective environment and to teach young people how to solve conflict in a non-violent manner, the commandant added.