Nilakanta Sharma's historic win got him richer with Rs 75 lakh award and a suitable job in the Youth Affairs and Sports department, Manipur. 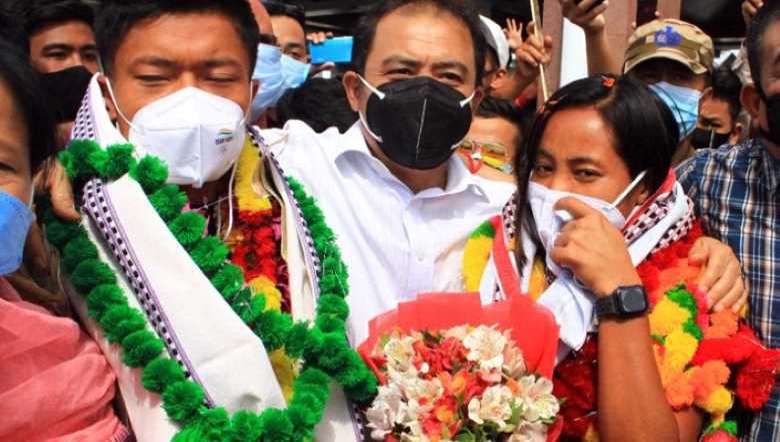 Indian hockey stalwarts Shanglakpam Nilakanta Sharma and Sushila Chanu Pukhrambam returned home from Tokyo Olympics to a rousing welcome by the state government and well-wishers upon their arrival at the Bir Tikendrajit International Airport, Imphal Wednesday.

The occasion was a momentous one, as though the women's team finished in fourth place, India rewrote history by winning the bronze medal in Men’s category after 41 years of Olympic Games history.

Nilakanta Sharma's historic win got him richer with Rs 75 lakh award and a suitable job in the Youth Affairs and Sports department, Manipur.

The BCCI had awarded him Rs 1.25 crore, the Indian Olympic Association with Rs 25 lakhs and BYJU'S also provided him Rs 1 crore as rewards for the Indian Hockey team.

As for Sushila Chanu Pukhrambam, she will get Rs 25 lakh from the state government for participating in the Olympic Games and a job at Youth Affairs and Sports department, Manipur.

Nilakanta Sharma and Sushila Chanu along with Hockey India president Gyanendra Ningombam touched down at Imphal airport this afternoon and they were greeted by Chief Minister N Biren Singh and some of his cabinet colleagues, with garland and appreciative words.

Later, both the hockey players were driven to their respective places where reception was accorded to them for their brilliant efforts in Tokyo Olympic Games 2020.

Biren, who was present in both the reception functions, stated that the state Cabinet had recently created 18 posts reserved for Olympians of the State in the Youth Affairs and Sports department, Manipur. He said that the created posts included 10 posts of Assistant Director for participants, five posts of Deputy Director for medal winners and three posts of Joint Director for Gold Medal winners at Olympic Games.

He further said that a grand reception ceremony of the State’s Athletes, who participated at the Tokyo Olympics 2020 will be organised at the City Convention Centre this month and added that the respective cash rewards and job appointment orders for the Olympians would be handed over to them on the occasion.

Asserting the need for developing more sportspersons from the state, Biren maintained that games and sports take a major role in instilling good discipline and manners among the youths. As the government is putting in much effort to end the drug menace from the state, it is imperative to encourage the youths, make them feel interested in games and sports and divert their minds from getting addicted to intoxicating substances, he said.

The young and talented Olympians would be a source of inspiration and motivation among the youths of the state, Biren added.