Th Biswajit said that ‘Azadi ka Amrit Mahotsav’ is an initiative of the Government of India to celebrate and commemorate 75 years of Independence of progressive India. 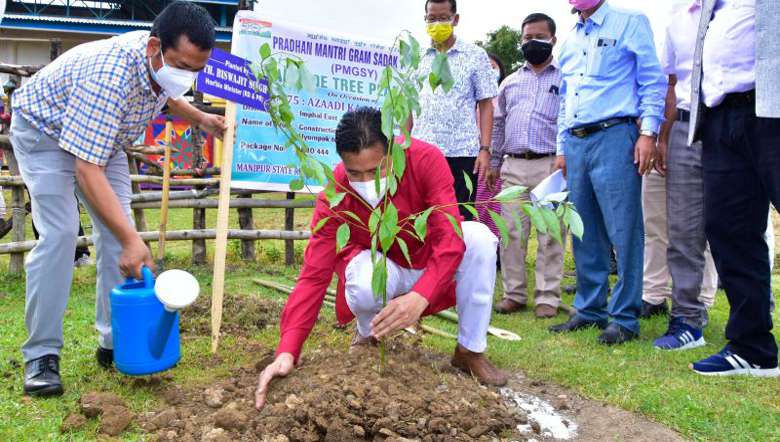 Rural Development Minister Thongam Biswajit Singh on Wednesday led a tree plantation drive along the stretch from Uyumpok to Lamboikhul in Khundrakpam assembly constituency at Imphal East district as a part of the ongoing ‘Azadi ka Amrit Mohatsav’ celebrations to mark the 75th year of India’s Independence.

Speaking to the media, he said that ‘Azadi ka Amrit Mahotsav’ is an initiative of the Government of India to celebrate and commemorate 75 years of Independence of progressive India and the glorious history of its people, culture and achievements.

The 75-week long celebrations is a part of Prime Minister Narendra Modi’s vision of Atmanirbhar Bharat (self-reliant India) which aims to make the nation a bigger and more important part of the global economy, pursuing policies that are efficient, competitive, resilient, being self-sustaining and self-generating, he said. He asked the people of all walks of life to cooperate and participate in fulfilling PM Modi’s vision.

Regarding the prevailing COVID-19 pandemic, he urged all the eligible persons to get vaccinated and expressed that vaccination is the only way to combat the pandemic. He also thanked the government for providing free Covid vaccines under the able leadership of Prime Minister Narendra Modi and Chief Minister N Biren Singh.

It may be mentioned that ‘Azadi ka Amrit Mahotsav’ has been inaugurated by the Prime Minister Narendra Modi by flagging off ‘Dandi March’ from Sabarmati Ashram, Ahmedabad, Gujarat on March 12, 2021. The celebrations started 75 weeks before the 75th anniversary of India’s Independence and will end on August 15, 2023.

The tree plantation drive today was organised by Manipur State Rural Roads Development Agency (MSRRDA), Rural Engineering department. It may be mentioned that the road stretch from Uyumpok to Lamboikhul has been constructed under the package No MN0444 under the Phase X of Pradhan Mantri Gram Sadak Yojana (PMGSY).