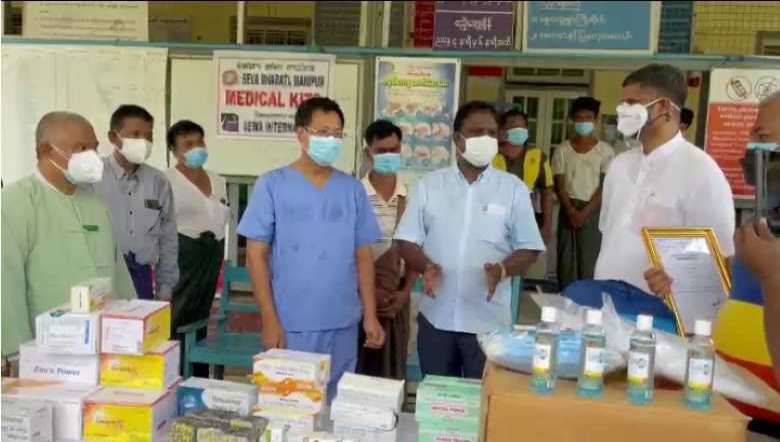 In the effort to help the suffering people of border town Tamu in Myanmar as the COVID-19 pandemic rages on, the Seva Bharati Manipur in collaboration with the Shanatan Dharma Sevak Sangha Myanmar visited the hospital in Tamu and provided medical aid to the district level COVID-19 Prevention, Control and Treatment Committee, Myanmar.

The medical aid, including medicines and PPE, was provided under the sponsorship of Seva International, the Covid response team Seva Bharati, Manipur stated in a release. The release was signed by RK Dinamani.

The doctors in Tamu were immensely grateful to receive the medical aid and provided a certificate in return, it added.

It stated that later, leaders of Gorkha Samaj which is an organisation working for the Nepalis, were also provided with medicines in an occasion held at Gorkha Dharmasala. They also expressed their wish to get vaccinated, to which the organisers informed them that the Government of India and the government of Manipur will be consulted regarding their wishes, it mentioned.

A separate occasion for providing medical aid was held at Leibi village in Tengnoupal district. It was attended by the chief of the village, the release stated.

During the trip, medical aid was also handed over to the Shanatan Dharma Sevak Sangha Myanmar, the Meitei Council Moreh and the Tamil Sangam Moreh so that they may be further provided the required aid to the Myanmar Indo Meitei Group as well as communities residing in Moreh, it added.