Agriculture department deputy director, S Radhapyari said that to promote organic farming in the state, the department has also implemented a scheme called MOVCD-NER under MOMA since 2016 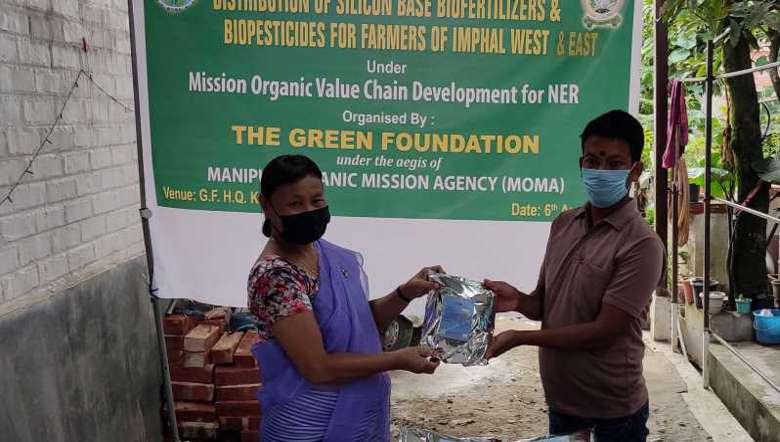 With an effort to bring revolution in organic farming in the state, the Green Foundation distributed silicon base biofertilizers and biopesticides to 1,000 selected farmers of Imphal East and Imphal West.

The programme was organised by the foundation under MOVCD-NER of Manipur Organic Mission Agency (MOMA) at its headquarter at Kwakeithel on Friday.

Agriculture department deputy director, S Radhapyari said that to promote organic farming in the state, the department has also implemented a scheme called MOVCD-NER under MOMA since 2016. Under this scheme, some crops including chak-hao, high yielding variety seeds, maize, soyabean and mustard were started cultivating with the organic farming method.

While the department is promoting organic farming in the state, the Green Foundation is taking the role of service provider by producing biofertilizers and biopesticides, which is highly appreciated, she added.

She further wished the foundation to fulfill their objectives of bringing organic revolution in the state.

Central Agricultural University (CAU) Imphal retired dean, Naorem Iboton Singh, who supervised and guided the Green Foundation, said that silicon base biofertilizers and biopesticides are made up of bio-char and Azospirillum. These biofertilizers and biopesticides can have the ability to absorb nitrogen, which helps the plant to grow, from the atmosphere and also prevent pests called ‘blast’. It should be used particularly in paddy farms.

There is no need for spraying as it can be easily spread by hand, he added while encouraging the farmers to use such highly useful organic items that can help to prevent health and environment hazards.

The Green Foundation assured that any farmers can compensate the amount invested in their farming if there is low yielding after using the items. However, the farming method should be completely organic, it added