Although people had less anticipation of a medal from team games, the win against formidable Germany was a real treat 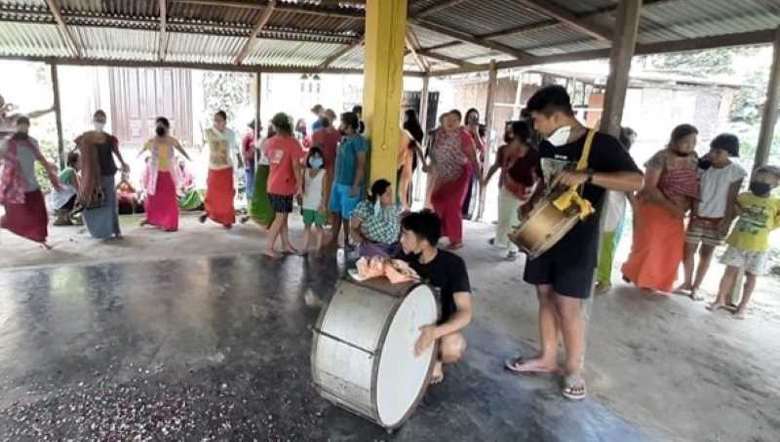 Locals of Kontha Ahallup rejoice and dance to the drumbeat of Thabal Chongba (PHOTO: IFP)

Locals of Kontha Ahallup, the hometown of Shanglakpam Nilakanta Sharma in Manipur, celebrated the success of the Indian Men's Hockey team that beat World’s fourth ranked Germany by 5-4 goal to grab the bronze medal in Tokyo Olympic Games 2020.

With the bronze medal win, the Indian Men's hockey team also broke the 41-year-old jinx that plagued the hockey coffers without a medal winning performance.

Although people had less anticipation of a medal from team games, the win against formidable Germany was a real treat. More so, Sh Nilakanta’s presence in the Indian squad made the state proud and winning the bronze medal, even more satisfying and fulfilling to the sports lovers of Manipur.

The celebrations were frenzied at Kontha Ahallup as people of all ages came out, some bursting crackers, dancing and even took out the 'Thabal Chongba' dance to celebrate the success of Indian team in the Tokyo Olympic Games. People thronged the residence of Nilakanta to share the moment with his family members, who too were equally jubilant by the victory.

Under the Academy wings, Nilakanta got to play many exposure matches including foreign tour at Belgium and played FIH Hockey Olympic qualifier at Bhubaneshwar and emerged winners in 2019.

Nilakanta’s mother Kujarani said, “The Olympic Games being a different ball game, a bronze medal will be worth as good as gold. People encouraged us and prayed for the Indian team, more so for Nilakanta. We kept our fingers crossed and hopefully we were rewarded today with the victory and we are so happy.”

Nilakanta is the second son, among the three children of Sh Inaocha and Kunjarani of Kontha Ahallup, Imphal East. Nilakanta has passed his 12th standard and is currently employed with Railways.