So what, we eat on the floor

IFP Editorial: It was simply our culture. Like most Southeast Asian cultures, Manipuris eat sitting on the floor and with hands, not with spoon or knives or fork. 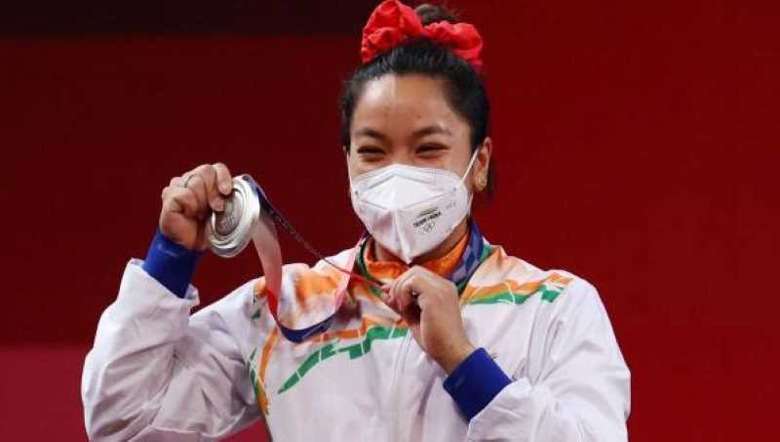 The day she returned to Manipur after her Olympic glory, Manipuri weightlifter and silver medallist Saikhom Chanu Mirabai posted a photo of her eating home-cooked food at her home sitting cross-legged on the floor with her kin after two years in the social media and it went viral, and it shocked some or rather left them speechless.

A news-report said, despite nationwide support and the extravagant welcome she received in Manipur, it seems like Mirabai Chanu hasn’t forgotten her humble life. In the picture, Mirabai Chanu can be seen sitting on the floor while having a simple home-cooked meal.Mirabai was simply celebrating the occasion of her having food at home after a long gap of two years, during which she was training for the Tokyo Olympics. After the shame in Rio Olympics, Saikhom Mirabai was determined to succeed in Tokyo and that is exactly why she trained non-stop in India and abroad for two years in pursuit of her dream. She did not even bothered to take a break and return home to have even a few moments of quality time with her parents and kin. Such was her determination.

Hard work and determination pays, this is what she had shown to the sporting world. Right from the time her local coach Anita Chanu had seen her grit and determination, Mirabai had not looked back and she hitched rides in trucks laden with sand from her distant village to reach Khuman Lampak stadium where she trained every day. After bagging India’s first ever silver medal on the first day itself at Tokyo, she was overwhelmed with joy. But, she has not forgotten the people who helped her to her Olympic glory, even the truck drivers who drove her every day and after coming back to Manipur she is on the look-out for those drivers to thank them personally. This is an example of pure greatness and humility at its utmost.

When she returned to Imphal, the curfew restrictions were thrown to the winds in the euphoria. The welcome at Delhi Airport when she touched down from Tokyo was also euphoric. She had won the first silver medal in weightlifting for India, a feat after Karnam Malleshwari won the bronze medal in weightlifting in 2000 Sydney Olympics. Indians celebrated it as if it is their own. While Dingko’s gold campaign at the 1998 Asiad inspired the budding boxers of India, Manipur’s sports journey took a turn for the better and the state became a powerhouse of Indian sports no longer to be shunned or ignored. Mirabai had the complete support of the Indian sports establishment in her endeavours. Mirabai lifted a total of 202 kg (87 kg in snatch+115 kg in clean and jerk), three kilograms lower than her personal best of 205 kg. Zhihui lifted eight kilograms more (94 kg in snatch+116 kg in C&J) than her Indian counterpart.

Well, after bringing home a silver medal and glory for the nation and the state she had ‘Ghar ka Khana’ as they say after two years and what is more filling than home-cooked food. So, it is rather strange that some Indians were shocked at the sight of Mirabai sitting cross-legged on the floor and enjoying food with her kin. Some had even tried to project ‘eating on the floor’ as a symbol of poverty and humility. It was simply our culture. Like most Southeast Asian cultures, Manipuris eat sitting on the floor and with hands, not with spoon or knives or fork. During public feasts, Manipuris enjoy eating while seated on the floor as is the tradition although some rich folks eat on dining tables at home which is also a recent phenomenon.

Sitting on the floor givesone a brand new, humble and grateful perspective on others, the world and oneself. There is a reason monks meditate on the floor and not in chairs. It is simply easier to be grounded and connected with the spiritual side of life.In some cultures eating while sitting on the floor is considered demeaning. Nobody has the right to judge the cultures, and we think sitting on the floor while eating, keeps you rooted to the earth.