Mahila Shakti Kendra at Dikiuram village was renovated by 44 Assam Rifles under the aegis of 22 Sector of Assam Rifles (IGAR) by repairing its walls, flooring and the leaking roof. 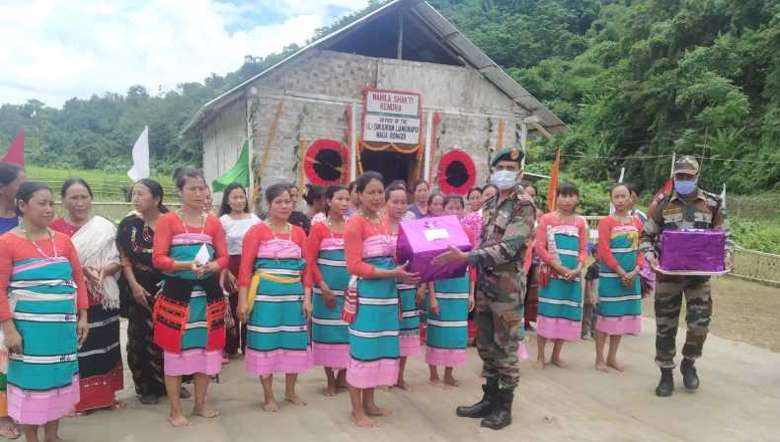 Mahila Shakti Kendra at Dikiuram village was renovated by 44 Assam Rifles under the aegis of 22 Sector of Assam Rifles (IGAR) by repairing its walls, flooring and the leaking roof.

After 54 days of repairing, the office of Women Society was completed and inaugurated, and dedicated to the spirit and grit of the local people who worked hard with troops of Assam Rifles by 44 Assam Rifles commandant today.

Speaking on the occasion, 44 Assam Rifles commandant colonel Pradeep Kumar said their dream of ‘Choosing to Challenge’ has been fulfilled. He said gender discrimination is the biggest problem which women face, be it at home or at workplace.

However, once she becomes married, the notion that she solely can look after the household chores and raising children takes a toll on her personal health.

He also paid floral tributes to Rani Gaidinliu a national freedom fighter and urged the locals to cooperate with the security force in releasing the dreams of Rani Ma. He thanked the womenfolk who, fighting all odds, kept working selflessly to unbind a new era of development in the area.

He further emphasised upon the contributions of women in nation building and appreciated their hard work. He called upon people to move towards self reliance and sustainability by acquiring new skills.

The courtyard of the office was also renovated with a new garden and a bamboo gate. The villagers, following Covid guidelines, sang a song of thanks and applauded the efforts of the 44 Assam Rifles for ushering a social change in the village.

The commandant further said that the renovated women’s society office will help in creating awareness about government schemes, training and capacity building.