We must make sacrifices to achieve our goals: Olympic medalist Saikhom Mirabai Chanu 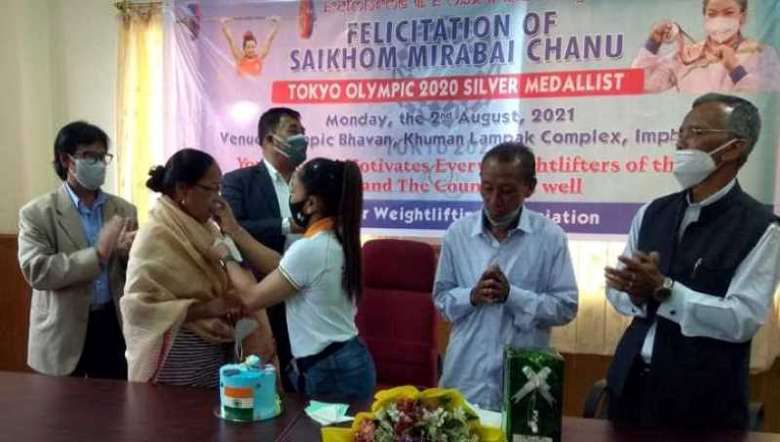 Olympian S.Mirabai Chanu sharing her joyous moment with her coaches during her reception by Manipur Weightlifting Association at Olympic Bhavan, Khuman Lampak. Family members were also present on the occasion (PHPTP: IFP)

Olympic medalist Saikhom Mirabai Chanu called upon all to make sacrfices to achieve goals as she was given a warm reception by the Manipur Weightlifting Association at Olympic Bhavan, Khuman Lampak, Imphal on Monday.

"We need to respect our coaches, teachers and parents and maintain discipline and make sacrifices, so that we reach our desired goal. I am indebted to all sport lovers of the state and country as a whole for supporting me to where I am today,” Mirabai said while speaking at the reception programme.

"I have faced lots of hurdles and hardship, either in everyday life or training sessions, and wanted to show the world what a small state can do on the big platform of a world championship including the Olympics,” she said on her winning the silver medal for the country.

She also pointed out the dearth of weightlifters from the state and said, "I wanted more youngsters to come forward so that we could produce more champions".

The three coaches who moulded Mirabai Chanu to a champion weightlifter as well as L Anita Chanu and S Brojendro Singh of YAS department along with Aheibam Ranjan Singh of SAI/STC were also feted on the occasion.

He also called upon the young weightlifter to emulate Mirabai Chanu’s example and make further leap, so that the land could be rightly called the land of sportspersons in years to come.

Sunil Elangbam also noted that a training centre for Centre of Excellence is also coming up in the state under the Khelo India Scheme and said that once established, this will prove to be a morale booster for the sportspersons.

Mirabai said she is likely to leave the state on August 10 in preparation for the Commonwealth Games and Asian Championship. “I feel more determined now and will definitely work much harder for the next Olympic Games 2024 to be held at Paris,” she said.