The massive mudslide that occurred at Lamlenkon in Tujang Vaichong jurisdiction along the state oldest highway, Imphal-Tamenglong road submerged more than 300 metres stretch of the road completely, disrupting the movement of all types of vehicles. 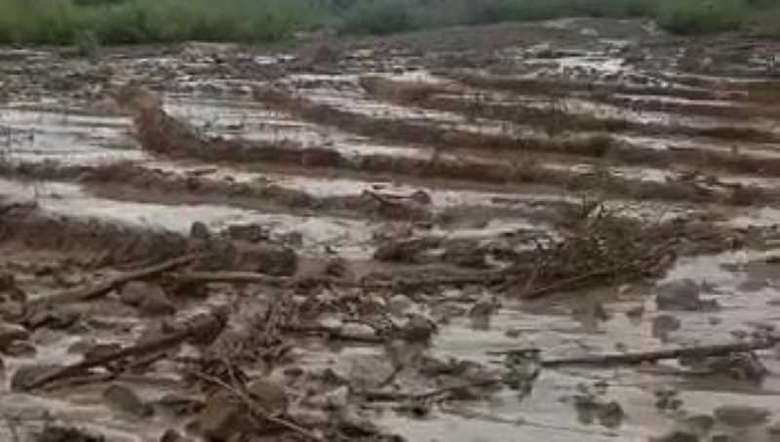 Residents of Tujang Waichong and Selsi village in Kangpokpi district of Manipur woke up on Monday morning to the sight of a massive mudslide that reportedly submerged around 30 hectares of their paddy field, shattering their hopes of survival during the pandemic.

The massive mudslide that occurred at Lamlenkon in Tujang Vaichong jurisdiction in between Selsi village along the state oldest highway Imphal-Tamenglong road, commonly known as IT Road also submerged more than 300 metres stretch of the road completely disrupting the movement of all types of vehicles.

The place of the incident is about 37 km away from the district headquarters Kangpokpi.

KSO Twilang block president Enock Kipgen immediately sent out an SOS via social media, seeking immediate attention and swift action on the part of the authority concerned in the morning from the spot with visuals of the massive mudslide and its impact.

His post drew condemnation on social media right after it went viral and people of the Twilang area also expressed disappointment over the chief minister's statement.

Mentioned may be made that Imphal-Tamenglong road construction was completed a few years ago but owing to its reported substandard quality and alleged absence of proper drainage and retaining wall, the road has returned to the same previous deplorable conditions.

Apart from around 30 hectares of paddy field belonging to 22 farmers, more than 300 metres of the state's oldest highway had been submerged by the mudslide while it had also disrupted the movement of vehicles.

He maintained that people of the Twilang area under the IT Joint task force on COVID-19 have been fighting the pandemic since the first wave despite shortages of infrastructures, deplorable road conditions, and various other grievances owing to the absence of proper governance.

He recalled that people of the Twilang area worked hard in their respective paddy fields as they solely depend on it with high expectations of garnering sufficient food grains since business could no longer take place owing to the pandemic.

The farmers affected by the mudslide are most likely to suffer extremely from food shortages next year, he added.

No government officials or representatives, even SDO Tujang Vaichong and officials from the district administration Kangpokpi or department concerned visited and inspected the site so far, he said.

With the initiative of the Joint Monitoring Development Committee IT Road tying up with MLA of Kangpokpi assembly constituency Nemcha Kipgen, Tadubi MLA Kayasii apart from Forest minister Awangbow Newmai, some portions of the road submerged by the mudslide with debris were cleared today, he said. One JCB was sent by 4th Bihar Regiment Tamei Battalion on request and another local JCB of Makui was engaged in clearing the debris, he added.

"We will continue to work on clearing the road tomorrow. If it continues to rain this evening, worse could happen again,” he said.

Expressing discontentment at statement of chief minister N Biren on his Facebook post, Enock Kipgen said that the chief minister's statement was very unfortunate and not expected. “Natural disasters can occur anytime and at any place and we do not expect such a response from our chief minister. Rather, we need immediate attention of the government to clear the debris and address the grievances of the poor farmers in particular and the people of Twilang area at the earliest,” he added.

He clarified that the people of the Twilang area are vehemently against deforestation and poppy plantation while adding that they never encourage such practice in the area.

KSO Twilang block president urged all authorities concerned and the state government to immediately swing into action to address the grievances of the people especially the affected farmers, and also initiate immediate remedial measures to clear the debris of the mudslide at the earliest.