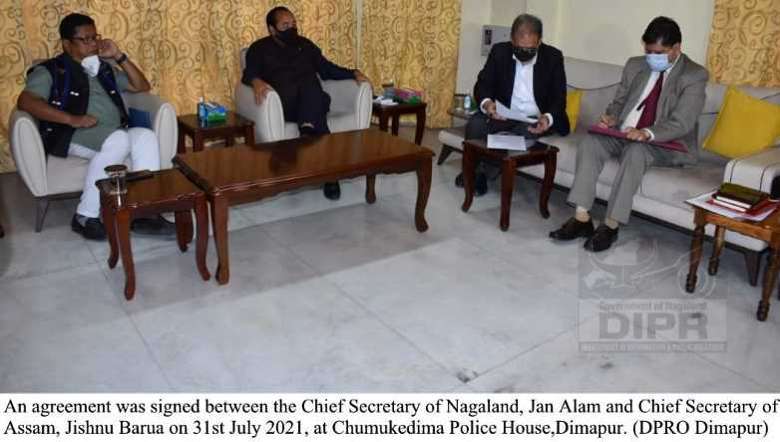 With a view to de-escalate the tense situation prevailing in Dessoi Valley Reserved Forest/ Tsurangkong valley due to the stand-off between the armed police forces of Nagaland and Assam, an agreement was signed between the Chief Secretary of Nagaland, Jan Alam and Chief Secretary of Assam, Jishnu Barua on Saturday, at Chumukedima Police Housein Dimapur, in the presence of Deputy Chief Minister Nagaland, also incharge of Home and R&B, Y Patton and Assam Education Minister, Ranuj Pegu, a DIPR report said.

Both sides agreed that to maintain peace and tranquility in the areas around Ao Senden Village and Vikuto Village as they are known in Nagaland and known as Jankhona Nala/Nagajankha and Compartment No.12 respectively in Assam, urgent and effective steps are required for diffusing the stand-off between the security forces of Nagaland and Assam, the report added.

In this regard, it was decided by both sides that security personnel of both states will simultaneously move back from their present locations to their respective base camps in the next 24 hours as far as possible.

Further, it was agreed that Nagaland and Assam shall monitor the area by surveillance using UAV and satellite imagery with a view to maintaining status quo. The Superintendents of Police of the districts of Mokokchung (Nagaland) and Jorhat (Assam) shall ensure orderly withdrawal of the respective forces and shall be responsible for it in the instant case, the agreement noted.

Patton thanked Minister Ranuj Pegu and Chief Secretary of Assam, Jishnu Barua for taking the trouble and coming all the way to Nagaland for signing the agreement. He informed that the signing of agreement for simultaneous withdrawal of security personnel was decided after interaction with Union Home Minister, Amit Shah on July 24 and 25, 2021.

Patton also requested the Assam counterpart for safe passage of Naga commuters not only in some particular gates but in all the gates so that the travellers were not harassed.

Assam Education Minister, Pegu congratulated Union Home Minister Amit Shah, the CM of Nagaland, the Deputy CM of Nagaland, and the Assam CM for their statesmanship in resolving the border issue and was optimistic that cordial relations between the states would prevail.