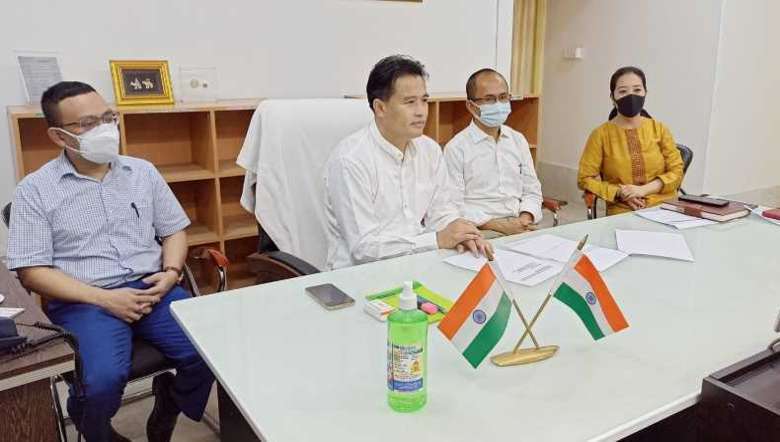 Textiles, Commerce and Industry Minister Thongam Biswajit and other state officials during a virtual conference with Yazaki India Pvt Ltd on July 29, 2021

Yazaki India Pvt Ltd under Yazaki Corporation Japan has offered to set up a wire harnessing unit in Manipur to help generate employment to 1500-2000 youths of the state.

Managing director of Yazaki India Private Ltd Prasant Nayak made the offer for a wire harnesssing unit in Manipur to Textiles, Commerce and Industry Minister Thongam Biswajit and other state officials during a virtual conference on Thursday.

The managing director said the company produces zero pollution and it was keen to start a manufacturing plant in Manipur which will provide employment to 1500-2000 people in the state.

Biswajit, while accepting the offer, told the managing director that necessary arrangements will be made to provide land for the harnessing unit after consulting the state chief minister.

During the conference, the Yazaki India managing director also said the company provides employment to over 12,000 people in its manufacturing plant at Maharashtra, Tamil Nadu, Rajasthan, Gujarat, Karnataka, Uttarakhand, Jharkhand and Delhi.

Once the manufacturing plant is started in Manipur, the state can begin trade with South East Asian countries, thereby developing the economy of the state, he aded.

Biswajit also said the problem of unemployment can be reduced if there are more entrepreneurs in the state.

Although people outside Manipur think that there is a bad law and order situation in Manipur, there is peace in the state under the BJP government. The condition of roads in the state has improved with the introduction of the Trans Asian Highway, he said.

Mentioning that railway may reach Manipur within one or two years, he assured that he will raise the matter regarding the manufacturing unit with the chief minister and other cabinets.