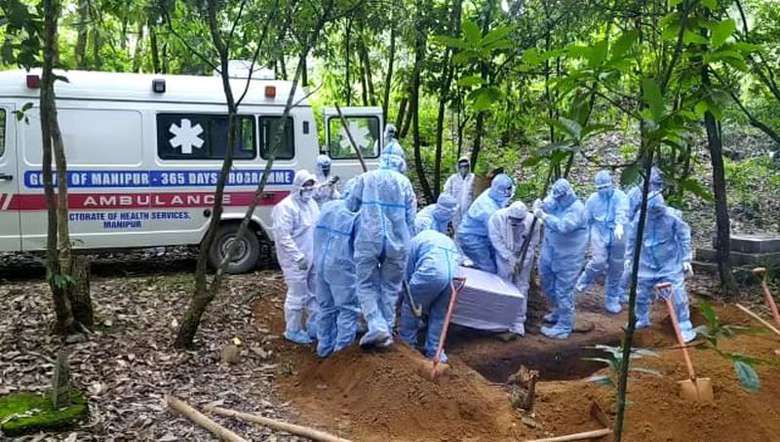 COVID-19 claimed 11 more lives in Manipur in a span of 24 hours, pushing the death toll to 1,521, official sources said.

Of the 11 deaths, four were from Imphal East, two from Kakching and one each from Imphal West, Bishnu pur, Ukhrul, Tengnoupal and Churachandpur, according to the State Level Covid 19 Deaths Audit Committee. While eight deceased had comorbidities, only three of the 11 deceased were vaccinated with the first dose and only one deceased was vaccinated with the second dose, it stated.

Apart from the 11 fatalities, Manipur also recorded 1,000 new COVID-19 positive cases, including 999 from the general population and one Central Armed Police Force (CAPF) personnel. The cumulative number of positive cases in the state is 96,824 (General Population - 92,849 and Central Security Personnel - 3,975) and the number of COVID-19 active cases is 10.895 (General Population - 10,842 and Central Security Personnel -53), a release issued by the COVID-19 Common Control Room stated.

The new COVID-19 positive cases from the general population included 166 from Imphal East, 299 from lmphal West, 62 from Thoubal, 133 from Bishnupur, 97 from Kakching, 23 from Ukhrul, 125 from Churachandpur, 23 from Chandel, 28 from Senapati, nine from Tamenglong, two from Tengnoupal, 29 from Kangpokpi and three from Kamjong, the release stated.

It further stated that a total of 841 persons were discharged during the same period. Due to various reasons, 175 persons are reported as discharged cases only today. Therefore, the total number of recovered cases is considered as 1,016 after Reconciliation with reports from IDSP Team, Home Isolation Team, Community Home Isolation and Hospitalisation Team as of July 29," it stated.

With these recoveries, the cumulative number of recovered cases is 84,408 and the recovery rate is 87.17 per cent as of Thursday, the release added.