Left with just five per cent of the range where they used to roam, tigers are losing their homes to deforestation, infrastructure, and other human disturbances, forcing them into rapidly diminishing pockets of nature. 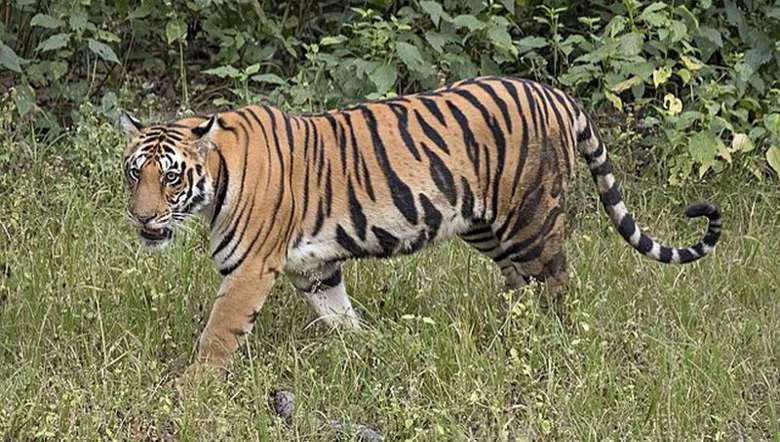 We must protect tigers from extinction because our planet’s future depends on it. Tiger is a symbol of beauty, bravery, strength, and nationality; so save the tiger means save the national pride. The beautiful, awe-inspiring tiger is one of the planet’s most iconic animals. Tiger the royal animal revered in various cultures is also called the ‘Umbrella Species’ and by conserving this majestic species, we also conserve pristine eco-system and thousands of other species in the same habitat.

Not so long back, there had been many instances where tigers were killed in Manipur. We have heard of the word 'Keichanba.' This is a procedure for trapping or to kill the tiger where very big enclosures are made all around the place where the tiger is believed to be there with posts and poles mainly of bamboo. This was not done for all tigers but for those which had become man-eaters or that had started frequently killing the cattle. The famous keichanba at Naoripat at Kakching and also at Wangoo are some of the examples. All these prove that there were abundant tigers in Manipur in the past though we are not now included in the global tiger map.

Tigers are incredibly adaptable animals and can survive in extreme temperatures -40°C to +50°C. A tiger's roar can travel upto 3 km. Tigers are the largest of all big cats in the world weighing upto 300 kg.

Global Tiger Day is celebrated on July 29 every year with this year’s theme, “Their survival is in our hands” as a way to protect the natural habitats of tigers, raise public awareness and support for tiger conservation issues for this magnificent but endangered big cat. This day is observed with much fervor and enthusiasm to build and develop a stronger bond between wildlife and people. The day was founded in 2010, when the 13 tiger range countries came together to create a Tx2 – 'Tigers times two', the global goal to double the number of wild tigers, say, 6,000 by 2022.

"Doubling tigers is about tigers, about the whole of nature - and it's also about us” - Marco Lambertini, the Director General WWF said. Tigers live in some of the most important but also most highly threatened habitats on the planet, where many of the most exceptional species thrive.

Left with just five per cent of the range where they used to roam, tigers are losing their homes to deforestation, infrastructure, and other human disturbances, forcing them into rapidly diminishing pockets of nature. According to WWF, globally there are only 3,890 tigers left. Ninety-five per cent of the tiger population has gone extinct since the beginning of the 20th century.

As per the latest tiger estimation report released by the Prime Minister, India’s tiger population is 2,967 tigers. This is about 60 per cent, the highest number of tigers so far a country has globally. Because of the planned efforts under project tiger, India could attain the achievement after the country launched the initiative on the April 1, 1973. It has been one of the most successful ventures in recent times to protect the striped predator. The tiger population declined from 3,642 in 1990 to just over 1,411 in 2006. Since then, the government has undertaken several steps to reduce the destruction of the Bengal tiger's natural habitat in the country. This project had the excellent recovery to increase the tiger population upto 2967 in 2020, almost in 51 tiger reserves across 17 Indian states. The government also launched an anti-poaching force composed of police, forest officials and other agencies.

The challenges for decline in tiger population are habitat loss – humans have cut down the forest areas for purposes like agricultural land, timber and create enough living spaces leading to a loss of 93% tiger’s natural habitat. Poaching & illegal trade of tigers happen as there is a huge demand for each body part of tiger from whiskers to its tail. Man animals’ conflict, the climate change–rising sea levels of Sunderbans etc. are wiping out the tiger population. None of the tiger conservation landscapes in India within the Bengal's tiger range are large enough to support an effective population size of 25.

With COVID-19 pandemic, families and communities are suffering in their daily life and failing in many livelihood activities. This has also presented a number of unique challenges to tiger conservation. Priorities and funding from across have shifted in the immediate response for the pandemic. Ecotourism has been severely impacted, especially impacting tiger landscapes and decline in revenues which has a direct threat to the livelihoods of community rangers, park revenue and income for local communities.

Manipur being in the border state with Myanmar is in a strategic route for wildlife crime. Wildlife crime is the largest crime atop the drugs and arms in terms of volume and number in the present world. The illicit demand for bones and other body parts of tigers for use in traditional Chinese medicine is another reason for the unrelenting poaching pressure in the country.

The mandate for project tiger is the hope to conserve tigers in a holistic manner. At present the dynamics of forest management and wildlife conservation have been distorted due to need of income, lack of manpower, lack of awareness, lack of land use policy and population pressure. A regional development approach in landscapes having Tiger Reserves is of utmost importance in our country. It should be viewed as a mosaic of different land use patterns, viz, tiger conservation, forestry, sustainable use and development, besides socio-economic growth.

Tiger habitats exist in environments of thousands of indigenous communities which depend on them and the traditional use systems of people in these landscapes are neither static nor benign. Therefore, we cannot view these protected areas in isolation from the surrounding socio-economic realities and developmental priorities of the government. This calls for a cross-sectorial and cross-disciplinary approach.

Tigers now need a ‘preservationist’ approach. Regional management planning is important all over the country to foster ecological connectivity between protected areas through a restorative input with integrated land use planning. In Manipur also recently, it was reported cattle to have been killed by a tiger in Tamenglong district. It is good news as it could include the state in the global tiger map and has also given the opportunity for the conservationist to take care of the striped animal. Though, we have the Acts and Rules, unless the acceptance from all sections of the society that our national animal is at a tipping point, we will be too late for tomorrow to save the tiger, the iconic, royal, majestic and the king of the forests.