The Olympic silver medallist extended her gratitude to her parents, coach and all the well wishers 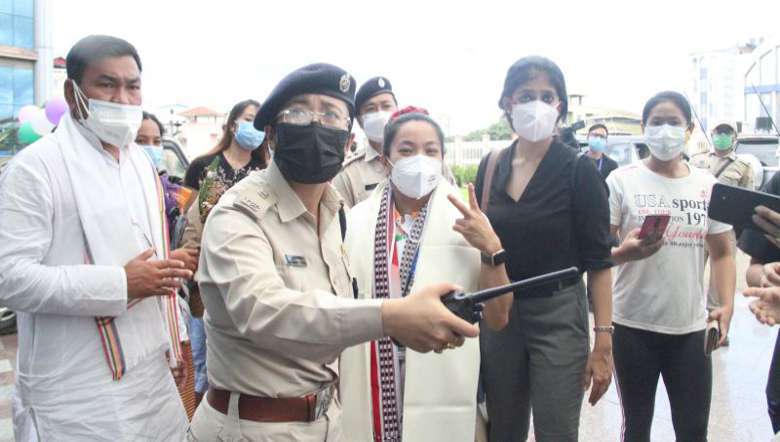 Many people of the state eagerly waited for her along the roadside with garlands and flowers and congratulated her for bringing the laurel for the state and nation. But due to the ongoing pandemic, people could not felicitate Mirabai Chanu in near contact.

"My strong desire to let the people know about my small tiny state Manipur, which many outsiders hardly know, at national and international level has been one of my driving forces to achieve this medal," expressed Mirabai to all her well-wishers during her reception.

The felicitation programme of the Indian weightlifter, who won silver medal at Tokyo Olympics 2020 in women's 49 kg, was organised by the Department of Youth Affairs and Sports.

Sharing some of her experiences during her journey of winning the medal, Mirabai extended her gratitude to her parents, coach and all the well wishers. She stated that with their persistent support and cooperation, she could bring laurel for the state.

She said that losing in Rio Olympic 2016 was the stepping stone to achieve this medal.

"After I was defeated in the Rio Olympics, I received many disheartening comments. Since then I had a strong conviction to perform well and bring a medal in the next Olympic Games and proved her personal example of tireless effort and firm determination. I had even requested the Union minister of Sports and Prime Minister to send me to USA for practice. But now I feel that my dream has come true,” said Mirabai.

ALSO READ: It’s a dream come true for me, I thank the billion prayers of all Indians: Olympic medallist Mirabai Chanu

Attending the felicitation function as chief guest, Chief Minister N Biren Singh said that winning a silver medal in the Tokyo Olympics by Saikhom Mirabai Chanu is a biggest pride for the state and entire nation.

Congratulating the parents of Mirabai, the CM said that she has created history as she is first in the state to get the silver medal in Olympic Games till date.

Biren further said that Manipur is much advanced in the promotion of sports and it has its own sports policy. Admitting the potential of sports in the state, the Prime Minister had selected to set up the only National Sports University of India in Manipur.

Many activities to promote various games such as boxing, weightlifting have already been taken up. Developments are going on to make the varsity as one of the best sports institutes, equipped with highly standard facilities, he added.

He also said that high standard gym facilities for weightlifting will be set up soon for the state.

Biren said that various associations for athletes usually face financial constraints in their functioning but they are playing important roles to enter the international arena of sports. Considering their inconveniences, the state government has decided to provide financial grants to the associations affiliated to Manipur Olympic Association.

He also exhorted Mirabai to take this achievement as a beginning of her journey and continue to put in her efforts till she wins a gold medal in the Olympics.

During the function, Biren handed over the reward of Rs 1 crore along with a joining letter of being appointed as additional SP (Police) to Saikhom Mirabai, which was announced earlier.

YAS Minister Letpao Haokip, who attended as president of the function, said that the present government is putting its all efforts to promote sports and games in the state as sports is embedded in the culture of Manipur. Various proposals have been sent to the Central government under Khelo India schemes to develop sports in the state.

He further said that winning the silver medal by Mirabai in the ongoing Tokyo Olympics shows that even a small state can stand tall at the international level if there is determination and hard work with absolute focus.

The felicitation programme was also attended by Deputy Chief Minister Y Joykumar Singh and Manipur Olympic Association president, who is also an MLA, Th Radheshyam Singh as guests of honour. Many other ministers, MLAs, officers of various departments also attended the function.

During the function, YAS department presented Rs 10 lakh to Mirabai Chanu for breaking the world record by lifting 119 kg in clean and jerk at Asian Weightlifting Championship held in April this year.

Education department also handed over a cash reward of Rs 3 lakh to the silver medallist.