Motsillaba Mingsel has already bagged ‘Best Short Film’ at the Indian Short Film Festival Awards 2021 which was held at a Web-platform in Kolkata this month, stated a release. 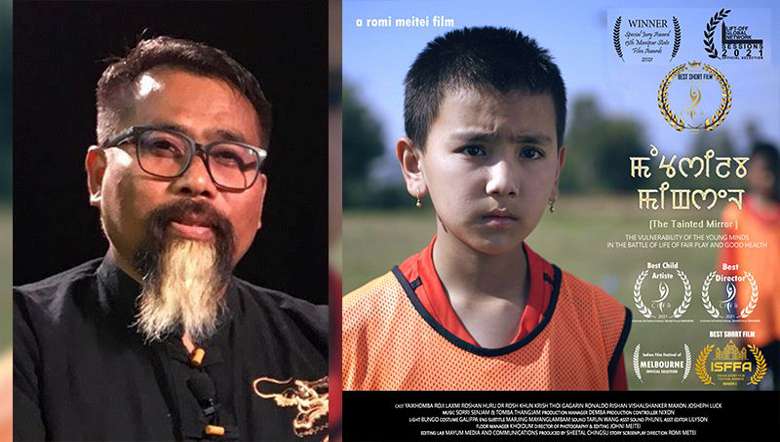 Manipuri filmmaker Romi Meitei’s film ‘Motsillaba Mingsel’ (The Tainted Mirror) has been nominated to feature at the Indian Film Festival of Melbourne 2021. The 12th edition of the festival is scheduled to begin on August 12 in Melbourne city, Australia.

Motsillaba Mingsel has already bagged ‘Best Short Film’ at the Indian Short Film Festival Awards 2021 which was held at a Web-platform in Kolkata this month, stated a release issued by producer Sheetal Chingsubam.

The film explores the repercussions of wrongful actions once they leave an impression upon children whose hearts are like mirrors that reflect their surroundings, it stated.

Actors such as Master Yaikhomba, Waikhom Rosan, Dr Rosh Khun, Rosi, Huru, Laxmi are the cast of the short film, it added.

It further stated that the crew members are Johni Meitei (Cinematography and Editing), spot sound recordist Tarun Wang, sound designer Lilyson while the story and direction of the film is given by Romi Meitei. Sheetal Chingsubam is the producer of the film, it added.

The film has won other accolades such as Special Jury Award at Manipur State Film Awards 2020, Best Director and Best Child Artiste at Cochin International Film festival and also found a place at Lift-off Online session in the United Kingdom, the release stated.

Preparations are all set for the film to be released during August in an online portal Pocket Films which is based in Mumbai so that the public can watch it. Further details can be obtained at  https://www.iffm.com.au/index.php, it added.