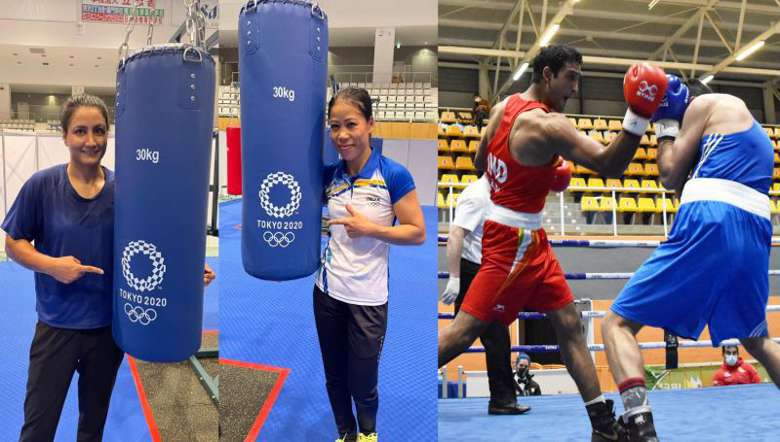 The Boxing Federation of India (BFI) stated that five Indian boxers will begin their challenge in the pre-quarterfinals stage as the draws were unveiled at the 2020 Tokyo Olympic Games on Thursday.

World No 1 Amit Panghal (52kg) alongside Lovlina Borgohain (69kg), Pooja Rani (75kg), Simranjit Kaur (60kg), Satish Kumar (91kg) are the five Indian pugilists who will start their quest for the medal in last-16 stage, BFI stated in a release.

On the other hand, seasoned boxer MC Mary Kom (51kg), Manish Kaushik (63kg), Ashish Kumar (75kg), Vikas Krishan (69kg) will be seen competing round-of-32 in their respective categories, it stated.
It stated that Vikas, the only second Indian boxer after Vijender Singh to compete in the third consecutive Olympic Games, will start proceedings for the country at the Tokyo Olympics on Saturday as he will take on Japanese boxer Mensah Okazawa in the round of 32. If progress, Vikas may face a challenge from London Olympics champion Cuban boxer Roniel Iglesias in the next round, it added.

If further stated that the six-time world champion, Mary Kom, who will be eying second Olympics medal after bronze in London in 2021, will start against Dominican Republic’s Miguelina Hernandez in the first round and likely to meet Rio Olympics bronze medallist Colombian boxer Ingrit Valencia in the second round.

World Championships silver medallist Amit Panghal (52kg) will have a comparatively easy challenge in his maiden Olympic Games as he will begin his campaign on July 31 in the last-16
stage, it stated.

Lovlina, the first woman boxer from Assam to qualify for the Olympics, will be challenged by Germany’s Nadine Apetz in the round-of-16 bout. World Championships bronze medallist Simranjit, who has been seeded fourth, will also be starting her campaign in the pre-quarters.

Pooja Rani (75kg), who was the first India to qualify for the Tokyo Olympics, will take on Algeria’s Ichrak Chaib in the last-16 stage and is likely to face strong challenge from Rio Olympics bronze medallist and second seeded Chinese boxer Qian Li in the quarter-finals, it further stated.

Apart from Panghal, Satish is another Indian boxer to kickstart his challenge in the pre-quarters in the men’s section as he will fight against Ricardo Brown, who is the first Jamaican boxer to compete at the Olympics since 1996 Atlanta Games. Satish, the first Indian boxer to qualify for the super heavyweight category, may play against top-seed and reigning world champion Uzbekh boxer Bakhodir Jalolov in the quarters, it added.

BFI further stated that the world Championships bronze medallist Manish will also have a tough task going ahead in the tournament as he is likely to face two-time world champion Andy Cruz of Cuba if progresses into the last-16 stage.

India have won two medals in boxing at the Olympic Games so far with Vijender Singh winning the bronze in 2008 and Mary Kom adding the second bronze to the tally in 2012. The upcoming Tokyo Olympics will witness a record nine Indian pugilists competing and aiming to win medals for the country. The upcoming Olympics will have 289 boxers, including 102 women and 187 women, fighting across 13 weight categories, it added.