The reconciliation taking place almost two centuries later is not to be confused with continuing violent confrontations with each other. The sense of hostility and enmity previously present between Nbena and Kangleipak no longer exists. 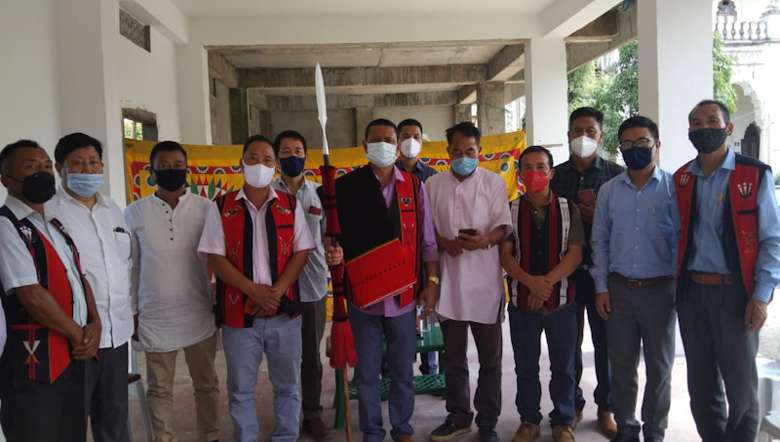 As 2021 passes by leaving most of us with a sense of regret, grief and maybe even a little bit of relief, a remote village in the Kangpokpi district of Manipur finds itself enshrouded in an air of excitement and anticipation. This ancient village plans to hold Its Platinum Jubilee celebration over the course of three years and across the three villages it is made up of, Chawangkining, Kachuangniu (Thonglang Atongba) and Tababang (Thonglang Akutpa). The Pandemic has put a hold on the usual operation of society, but it has not yet been able to diminish the excitement with which these villages look forward to and gear up for a celebration, one that requires a great deal of preparation. Which was why, on July 16, 2021, 11 men set out to Sanakonung to meet Iningthou Leishemba Sanajaoba. For most of us, meeting a king seems like an odd way to prepare for a celebration. But for the people of Nbena this was essential.

For this Christian village, reconciliation was a requisite, an attempt to cleanse themselves and atone before holding the biggest event the village has ever seen in its contemporary years.

In 1664, during the reign of Maharaja Khoonjaoba, Kangleipak had waged battle, with the village of Nbena. This initial battle was the beginning of a later string of battles. The battles taking place in the years 1826, 1850 and 1854, having been recorded in the Chronicles of Kangleipak. (Saroj Nalini Arambam Parratt. (2019). The Court Chronicle of the Kings of Manipur; The Cheitharon Kumpapa. Imphal: Jain Book Shop Publications), (L. Joychandra Singh. 1995, The Lost Kingdom; The Lost Chronicle of Manipur. Imphal. Prajatantra Publishing House).

The reconciliation taking place almost two centuries later is not to be confused with continuing violent confrontations with each other. The sense of hostility and enmity previously present between Nbena and Kangleipak no longer exists and peace has prevailed for more than a century. This occasion simply acted as an official recognition of pre-established peace between the two parties.

This historic meeting was attended by the Chairmen, Headmen and Pastors of the three villages, acting as representatives. It began with a brief introduction by Mani Charenamei, former member of parliament and was followed by the speech on the need for reconciliation by Ng. Wangraibou, Director of Lungsiat Ministries. There was then a Presentation of Gifts to Iningthou Leishemba Sanajaoba by chairmen and the Chiefs of the villages, followed by a word of acceptance from Iningthou Leishemba Sanajaoba signifying both his recognition and acceptance of the need for reconciliation. Finally, the gathering came to a close with a special prayer for Iningthou Leishemba Sanajaoba led by Reverend Manaithai Charenamei. One looks forward to the future where both parties that possess a shared history, will now begin to form a shared brighter future.