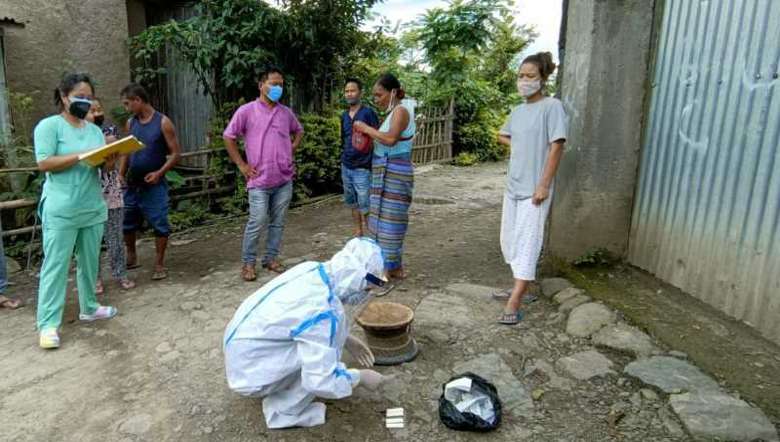 The house-to-house testing led by Dr Sanjeev and Dr Marilyn Songate under the supervision of medical superintendent district hospital Kangpokpi Dr Paotinlal Haokip, was conducted in collaboration with the Covid task force Kangpokpi and Kangpokpi police.

The medical team, including doctors and nurses, volunteers of Covid task force Kangpokpi, and police personnel had a hard time convincing the people to get tested as some households were seen intensely opposing the test. Some even rebuked the testing team but they were explained and convinced to get tested.

Some households were seen locking their gate and eschewing the test. Covid task force Kangpokpi took the lists of such households to report to the town committee for further action.

The volunteers sealed all the residences of the individuals found positive today and declared containment zones apart from the official declaration of the area as a containment zone by the authority concerned.

Mass vaccination was also held at Kholmun veng Ward No XIV Kangpokpi today where Kangpokpi Town Committee chairman Lunseh Kipgen and his family and chairman of Ward No XIV Thangjangam Kholhou also got vaccinated during the vaccination drive.

Kangpokpi Ward No XIV became the first Ward among fifteen wards in the town to conduct mass vaccination in the town.

With 17 new positive cases detected in the last 24 hours the active in Kangpokpi stands at 159 as 16 COVID patients were cured and discharged today while the fatality remained at 47.