The DYCSH workers assembled at IT Road in Kangpokpi town and took out a rally, raising slogans against the fuel price hike, along the Imphal-Tamenglong Road. 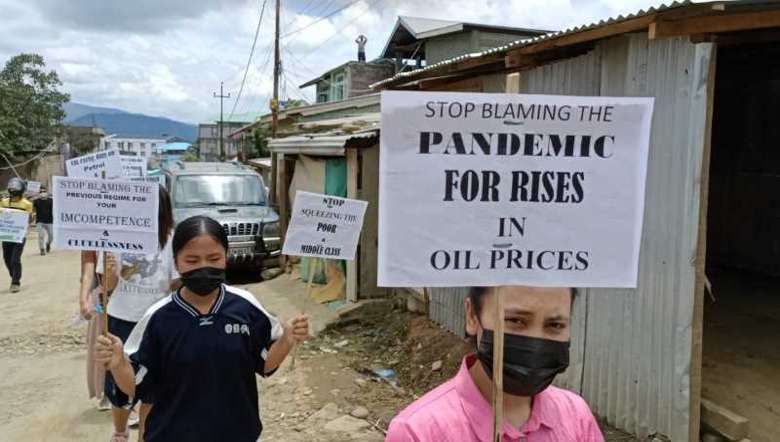 The DYCSH workers assembled at IT Road in Kangpokpi town and took out a rally, holding placards and raising slogans against the fuel price hike, along the Imphal-Tamenglong Road (IT Road).

Petrol is being sold at Rs 106.13 per litre and diesel at Rs 94.09 per litre at petrol pumps in Kangpokpi town.

Speaking to the media, general secretary (Administration), District Youth Congress Sadar Hills Jangminthang Kipgen, said that the symbolic protest is held against oil price hike on petrol, diesel, and cooking gas in the country. He said BJP’s ‘Achche Din’ is now proving to be ‘Costly Din’ as people of the country are seeking liberation from the expensive days of the BJP government.

“I would like to convey to the Prime Minister Narendra Modi and his government about the plight and misery of the poor and the middle class amid the rising of oil price in the country,” he said.

He pointed out that the continuous rise in oil price has its economic ramification on the poorest of the poor and the middle class which constitute 55 per cent of the country’s population. Oil price rise in the country is mainly based on two factors, the International crude oil price and taxes levied by the centre in the state government, he added.

“I believe the Centre and the state can rationalise the oil prices in the country by reducing the excise duty and value-added taxes on petroleum and petroleum products and quickly bring under the ambit of GST,” asserted the DYC Sadar Hills leader.