The four ZUF-K cadres were arrested by a team of Imphal East district commandos. 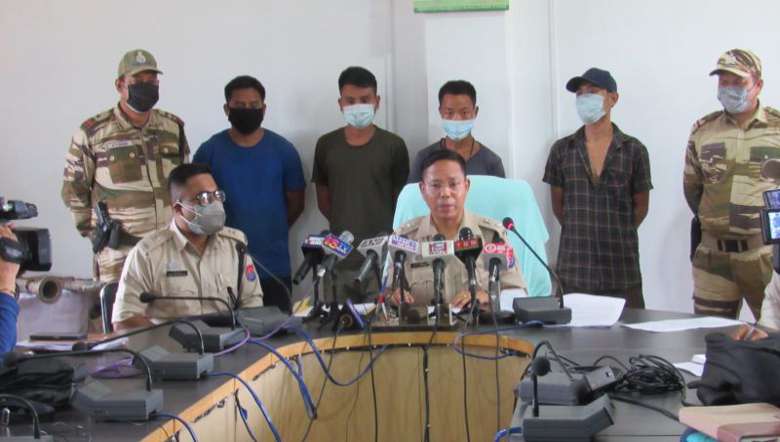 Four cadres of proscribed UG group Zeliangrong United Front-Kamson (ZUF-K), who have been involved in frequent extortions and making disturbances to the Indian Railway company’s workers and transporters along NH-2 and the general public, were arrested along with arms on Thursday night from New Checkon area.

Briefing the media on Friday at his office conference hall, Imphal East SP N Herojit Meetei said that Duanthuingam and Gaikhoungam are holding the posts of lieutenants and the other two are privates of the said proscribed underground group.

He further said that the arrest was made acting on reliable information regarding the presence of some active cadres of the outlaw organisation, who are involved in various unlawful activities along the national highway connecting to Jiribam from Imphal, for conducting a meeting in and around New Checkon area at around 9 pm on Thursday.

Based on the information, the team of district commandos led by officer-in-charge, CDO, Imphal East, Kh Henery conducted a counter-insurgency operation at New Checkon area. During the operation, the four cadres of ZUF-K were arrested from New Checkon near KR Lane playground, Imphal East district. The team also seized seven cell phones from their possession, he added.

After further interrogation, the arrested cadres revealed that there are some concealed arms and ammunition at Noney area, which they have been using for the unlawful activities. Immediately, a combined team of commando, Imphal East and 10 Assam Rifles along with the ZUF-K cadres rushed to Noney Part-V at around 11 pm on Thursday after providing prior information to the authorities concerned, said Herojit.

On reaching the said location as disclosed by the arrested ZUF-K cadres, the combined team cordoned the area and conducted search operation at around 1:30 am on Friday. After Gaikhoungam pointed out the exact location of the hidden arms and ammunition, the combined team recovered one HK Rifle 33 along with a magazine; two Rocket Propelled Grenade (RPG) launchers and one Self Loading Rifle (SLR). The arms were found concealed underneath the earth. The team continued the operation till 6 am on Friday, the SP added.

The arrested UG cadres along with the seized arms have been handed over to Porompat Police Station for further necessary legal action, said Herojit.