The struggles and sad realities of Nagas in Kangpokpi district 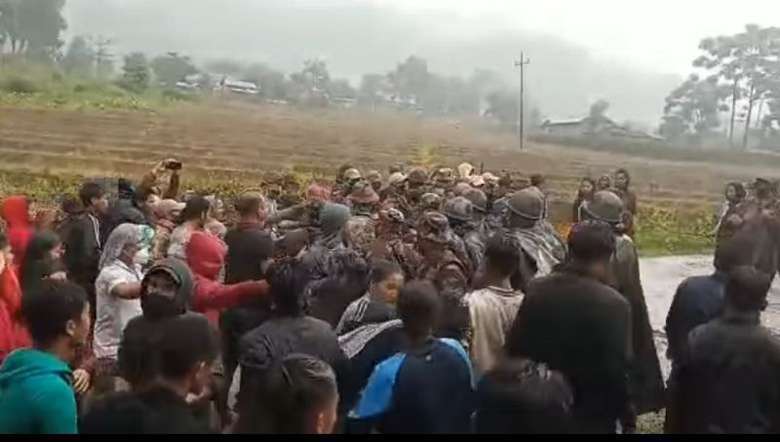 The dynamic of Manipur state vis-a-vis its demographic challenges ahead is a matter of concern for all indigenous people. The recent development in some hill districts of Manipur have witnessed that the indigenous Nagas became minority in their own land where their forefathers lived with glory. The best question of how the indigenous Nagas became minority in their own land can be answered with the demands of Sadar Hills district by the kukis which was eventually fulfilled and gifted as Kangpokpi district. In addition to that the Government of Manipur extended olive branch to the Kukis by signing Suspension of Operation (SoO) with its militants which later provided an opportunity to terrorise the general public on NH-2 (now Asian Highway) and Koubru Range area.

The poppy plantation, logging of timber and jhum cultivation in nexus with militants had given a nightmare for Kangpokpi district. Allowing the establishment of SoO camp in Koubru Range area gives a feeling of insecurity to the indigenous people living in Kangpokpi District as well as people living in isolated Imphal-Tamei Road. The feelings of peace and security provided to the people of IT-Road areas by the Assam Rifles in such UGs infested areas is not an exaggeration.

One such  example of insecurity felt by the general public living in Kangpokpi district has recently been shown to the world in the Chalwa incident. In connection with this, a memorandum of understanding (MoU) was signed on June 5, 2021 between the AR and kuki CSOs. As such, it was agreed to remove or replace the AR post (44 AR, E-Coy) from Gelnal. However, the majority of the general public living in those areas vociferously against and condemned it as uncalled for and one sided agenda. The sad reality that people feel at the moment in removing AR post from such crime-ridden isolated areas will give a safe haven for militants to carry out rampant extortion, collection of illegal taxes and kidnapping on highways.

It may be reminded that in January 2005 Chamtonbou of Tadon II was brutally beaten up by militants at Chalwa in front of all mute spectators. Another incident was on October 27, 2017 a victim identified as one church leader, Secretary of Tamei Centre church was  brutally assaulted by a man who identified himself as a cadre of Kuki Revolutionary Army (KRA). The militants tortured him and  threatened to shoot in the head. The victim was mercilessly kicked and slapped and detained  for five hours. The victim's wallet containing Rs 7,800 and smart phone were also snatched away by the KRA cadres. Another incident which occurred last year 2020 during peak of Pandemic lockdown was, the LPG supplier to Tamei was brutally beaten by  anti-social elements at Chalwa village, while extorting money from the supplier. These anti social elements could be militants or could be an ordinary citizen taking the name of militants, however the incident shows how people are harassed constantly along the IT road even during the pandemic times when people are struggling to find food on the table.

These are just some related incidents,  there are uncountable similar cases  on a daily basis. Extortion, kidnapping, killing etc. are part and parcel of public life in IT road areas of Manipur. The slogan of 'War on Drugs' needs to be implemented in letter and spirit in Kangpokpi district for a better Manipur.

It is a matter of concern that many new villages have been established in a short span of time in the Koubru Range area which is undeniably believed to be an influx from neighbouring countries. It may be noted that in 1972, there were only 27 Kuki villages in Kangpokpi district but in 2020, it has gone up to 94 villages with a rapid growth of 67 villages within a short span of 48 years.  The disproportionate growth of the population in hill areas in a particular district of Manipur is alarming and has caused the government to put a halt on due process of delimitation in the state. The hypocrisy and double standard of Nemcha Kipgen (MLA) has been exposed in public domain as she made irresponsible and condemnable statements during the land issue between Irang and Bena Akutpa where She advocated that all lands belong to the state government. Ironically, when it comes to the issue of KK
Reserved Forest and Mt Koubru, her associates outrightly rejected and opposed tooth and nail against the statement of the Chief Minister of Manipur when he maintained all land belongs to the Government and it has the authority to use all lands for development in the State.

Therefore, it is high time, the Government of Manipur should take up strict actions to check all the illegal activities in KK Reserved Forest and Koubru Hill Range area. It may be mentioned that the glorious history of Manipur should not be twisted and distorted at one's whims and fancy, rather all sections of society should learn to respect the rights of the others and strive for peace and harmony.

Freelance writer. The writer can be reached at Wijuab@gmail.com.